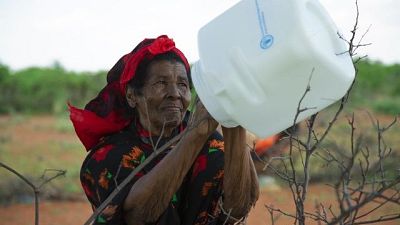 The desert locust invasion in Somalia has significantly affected the country’s food security, with successive generations of swarms destroying vital crops and pastures. Compounding the situation were floods, cyclones, droughts and the emerging socio-economic impact of coronavirus disease 2019.

To provide immediate relief as well as sustained access to nutritious food sources for vulnerable households to help them recover from these shocks and withstand future crises, the FAO office in Somalia, under its “Desert locust crisis – Somalia Action Plan”, implemented a project entitled “Protecting lives and livelihoods impacted by Desert Locusts in rural Somalia”.

Funded by the Directorate-General for European Civil Protection and Humanitarian Aid Operations (ECHO), the project combines short-term cash transfer with livelihood inputs. Beneficiary pastoral and agricultural households received unconditional cash and relevant inputs to restore productivity. The cash contribution helped vulnerable households meet their most immediate needs, while the inputs allowed them to get back into production and continue to feed their families.

In pastoral communities, the project primarily targeted women, youth, the elderly and others who stay behind during migration and other shocks (when men and boys move with most of a family’s herd for pasture, water or trade). Often, those who remain behind are left with a few lactating goats as their main source of food. FAO provided each household with unconditional cash transfers for six months to cover immediate household food needs alongside two animal supplementary feed blocks, one milk container and dewormed the remaining lactating goats. Similarly, vulnerable agricultural households received seeds, tools, fertilizers, three irrigation cycles and three months’ cash payment.

People living with disabilities and the elderly are often particularly vulnerable to disasters due to their reduced coping mechanisms in a crisis.

“We have no major income as a family, and I am disabled man who cannot provide for his family.” said Abdullahi Ali Abdirahman, a 56-year-old disabled man who was among the cash plus livestock beneficiaries in Galdogob district. “I usually receive USD 50 from a well-wisher, but it was not sufficient since I have many children in school and no income,” he said.

At his home in Bur-salah village, Abdullahi sat with his children, for whom he feels education is crucial. According to Abdullahi, the project meant that he could pay their school and madrasa fees, and keep them fed during the desert locust crisis and other recent crises. “The six-month payment FAO gave us has had a huge impact on my family. The payment made it easy for me to pay their fees and even buy basic needs like food/medicines,” he said.

The ECHO funded project enabled rural farmers and pastoralists to support themselves during the desert locust invasion and other increasingly frequent shocks like floods, cyclones and droughts.  Pastoralists and farmers were both able to use the cash while waiting for their animal feed supplements and crop seeds to yield results.

75-year-old pastoralist Deeqa Diriye from Bul-Salah in Galdogob was one of the oldest beneficiaries of the project. She relies on her small herd of goats for income and milk. The desert locust invasion rendered their rangelands bare, leaving the goats weak and sick from ailments. “I rely on my livestock and so does my family. The cash payment FAO gave us allowed us to have a proper sustenance during the drought. The supplements we were given also improved our animals’ strength, enabling us to use their product like milk, which, as an old person, I rely on,” said Diriye.

The ECHO-funded project in Awudwaq, Galdogob, and Galkayo districts supported around 2 408 households like Abdullahi and Diriye. “These interventions were implemented with the recognition that some pastoral households were coming to the end of their own abilities to cope with droughts and floods, and now an invasion of swarms of locusts.” said Khalid Saeed, FAO Livestock Coordinator in Somalia.

Desert locust invasions could be disastrous for vulnerable communities in Somalia, with the elderly and those living with disabilities likely to be disproportionately affected. FAO’s emergency and resilience project provided people like Abdullahi and Diriye with the necessary means to get through crises themselves and emerge stronger than before. 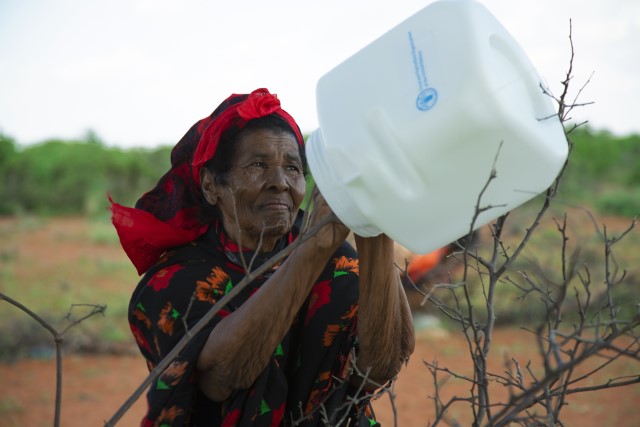