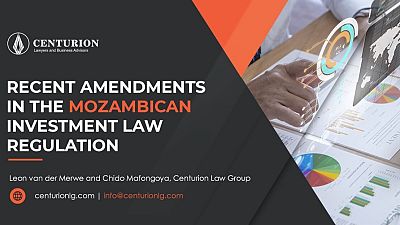 Investment has played a pivotal role in the economic development of Mozambique. It has been recorded that the country has been one of the ‘fastest-growing economies’ on the African continent for the last two and a half decades wherein it has outdone both regional and global growth averages with its rich oil and gas reserves that have been a ‘magnet’ for major investments from various countries across the world.1 Investment laws in Mozambique have been evolving with time to meet international best practices. The main law that governs national and foreign investments is the Mozambique’s Law on Investment, No. 3/93, passed in 1993. Its related regulations in August 2009, Decree No. 43/2009 replaced earlier amendments from 1993 and 1995, providing new regulations to the Investment Law. This article will give an overview of the new regulations.

Mozambique’s Law on Investment puts in place the requisite regulatory framework to promote Foreign Direct Investments (FDI). FDIs in Mozambique have been anchored by two mega-projects, namely the Mozal aluminum smelter established by mining giant BHP Billiton and the Temane gas field developed by petrochemicals firm Sasol.2 These projects pioneered the way for other mega projects as they proved that Mozambique was investor friendly. As a result, sizeable investments in the agriculture and tourism sectors followed as a result of investor- confidence in the country.

The Mozambican Investment Law Regulation has been amended by Decree no. 20/2021, which entered into force on 13 April 2021. With the aim of adapting national and foreign investment processes (“Investment Projects”) to a new institutional framework of coordination and in the context of a policy to attract and facilitate those investments, Decree no. 20/2021, of 13 April (“Decree”), was approved, introducing amendments to the Investment Law Regulation.3

Below are the some of the major highlights of the amendments [4]:

1.For the purposes of transferring profits abroad and re-exportable invested capital, the minimum value of foreign direct investment through the allocation of own capital shall now be MZN 7,500,000 (seven million five hundred thousand meticais) and the minimum value for annual exports of goods or services shall be increased to MZN 4,500,000 (four million five hundred thousand meticais).

2.The initial investment to be made in the first two years of activity by companies established outside Industrial Free Trade Zones, but that wish to benefit from the respective regime, will now have a minimum amount equivalent to MZN 75,000,000 (seventy-five million meticais).

4.As regards the entities responsible for the approval of the Investment Projects, we note the following5:

5.The transfer of an investor’s position, including in undertakings and units of the Integrated Tourism Resort Zone, shall now only be subject to authorisation by the entity that authorised the respective project and upon proof of compliance with the relevant tax obligations.

6.Investment project proposals must be sent to the Mozambican Agency for the Promotion of Investment and Exports (“APIEX”) in four copies, drafted in the official application form, and accompanied of the documents needed for the analysis. Depending on each case, the investment project proposals shall be accompanied of documents as lease contracts, property titles or professional internship and Mozambican workforce employment plans (for local content purposes). Decisions from the Provincial Secretary of State, APIEX General Director, and Finance Minister, shall be performed until three workdays after the reception of the proposal and APIEX shall inform the investors of the decision, until 48 hours after it.

7.Investors may assign totally or partially their rights regarding an investment, through duly based request to the entity which approved the project. The request shall be accompanied of tax compliance proofs.

8.Companies with headquarter in Economic Special Zones need to request authorization to hire foreign employees and shall register them with the entity which supervises the Employment sector.

9.Approved investors have access to a permanent residence authorization, which may be extended to their partner and children up to 21 years old.

10.Transfers to foreign territory of profits and dividends are permitted since the exchange legislation and the payment of taxes are complied.

11.The certification of companies operating in Economic Special Zones is made through the issuance of the competent certificate by APIEX, on ten workdays after the reception of the request.

12.Inspections to companies with headquarters in Economic Special Zones need a previous authorization by APIEX and shall be informed to those companies by this entity until five workdays after receiving the inspection request, except when the inspecting authority is the Tax Authority or the Economic Activities National Inspection.

14.The percentage of authorized sales to the local market from companies established in Industrial Free Zones may be modified by the Finance Minister, after founded request by the investors and positive opinion from APIEX and Tax Authority.

15.Claims related with investment matters regulated by the Investment Law and Regulation need to be sent to APIEX, which distributes them by the defendant authorities.  If the defendant authorities do not answer APIEX nor execute any measure to solve the claim, APIEX shall propose a solution to the Finance Minister, which will decide the question.

In conclusion, the amendments were intended for the main purpose of aligning it with the new investment institutional framework. It is also in line with investment-friendly policies which the country has been diligently pursuing. The regulations therefore encourage national and foreign investment in the country, which further encourages a significant boost in investments. It is advisable that investors take note of the new regulations and ensure that they are complaint with the same when they invest in the country.

Reach out to our team of lawyers and business advisors at Centurion Law Group. We seamlessly guide our clients through Africa’s abundant investment opportunities.

Distributed by APO Group on behalf of Centurion Law Group.