The Security Council today recognized the progress made in Darfur since 2007 to advance peace and security, following the complete drawdown of the African Union-United Nations Hybrid Operation in Darfur (UNAMID) on 30 June, as it looked forward to receiving an assessment of lessons learned from the experience no later than 31 October.

In a presidential statement (document S/PRST/2021/14) presented by the representative of India, Council President for August, the 15-member organ took note of the oral report delivered by the Under-Secretary-General for Operational Support on 27 July — titled “The Reports of the Secretary-General on Sudan and South Sudan” — which included details on UNAMID’s drawdown and liquidation phase.

Through the statement, the Council reiterated its call on Sudan’s Government — as well as the Juba Peace Agreement signatories and non-signatory armed opposition movements — to cooperate fully with the United Nations and the African Union during UNAMID’s liquidation phase, including by fully respecting all provisions of the Status of Forces Agreement of 9 February 2008.  It welcomed the 4 March signing of the Framework Agreement between the United Nations and Sudan, urging the Government to ensure that handed-over UNAMID team sites are used exclusively for civilian end-user purposes.  It also took note of the Operation’s near-completed efforts to destroy expired ammunition.

“The Security Council commends the people of Darfur for their resilience and cooperation with UNAMID to contribute to peace efforts,” members said through the statement, likewise commending the “unique partnership” between the United Nations and the African Union and the contribution of troop- and police-contributing countries and donors in support of UNAMID’s mandate.

While recognizing improvements in security conditions in some areas of Darfur, the Council also stressed the need for continued progress to consolidate peace and security, including through comprehensive implementation of the Juba Peace Agreement.  It urged Sudan to swiftly implement its National Plan for Civilian Protection (document S/2020/429) and encouraged further steps to promote and protect women’s rights and their full, equal and meaningful participation in all social, political and economic aspects of life.  More broadly, it underscored the importance of continued support by bilateral, regional and multilateral partners. 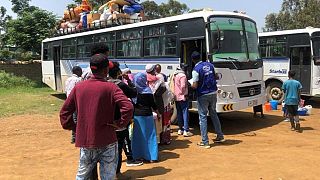