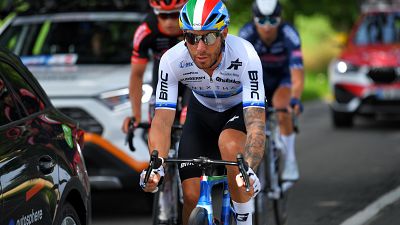 Team Qhubeka NextHash (www.TeamQhubeka.com) will be back in action this weekend, racing the UCI World Tour Donostia San Sebastian Klasikoa on Saturday the 31st July, followed by the UCI 1,1 Circuito de Getxo – Memorial Hermanos Otxoa on Sunday the 1st August.

Donostia San Sebastian Klasikoa will be a challenging race, starting and finishing in San Sebastian, with six major climbs featured over the 223km route.

Sander Armée, Carlos Barbero, Kilian Frankiny, and Bert-Jan Lindeman will be testing their legs out on the course for Team Qhubeka NextHash. They will be supported by the young, dynamic talents of Connor Brown, Dylan Sunderland, and Emil Vinjebo.

Our team for Circuito de Getxo will see Giacomo Nizzolo join our squad, replacing Emil Vinjebo. Placing second at last year's edition of the race, the European Champion will be looking to emulate his previous performance and possibly finishing one step higher.

“We have a hard weekend of racing coming up. The Basque country, while beautiful, will definitely test our riders. The San Sebastian World Tour race is a very tough race, followed by Circuito de Getxo. In Sebastian, the riders will have the freedom to ride, test their abilities, and see where they are as we start the second part of the season.

We are coming into Getxo with the ambition of winning the race, after Giacomo Nizzolo's second place last year. The whole team will be committed to working and achieving this goal.”

“Getxo is a one-day race I am looking forward to testing myself for the second part of the season. Last year, I had a good result, picking up second, so it will be nice to test myself and go deep and see where I am in the one-day races.”

Distributed by APO Group on behalf of Team Qhubeka NextHash.