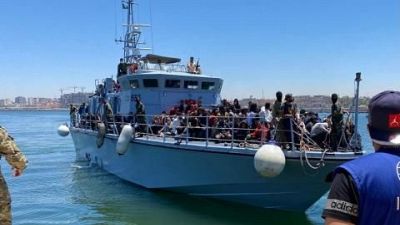 The International Organization for Migration (IOM) and UNHCR, the UN Refugee Agency, can confirm that over 270 migrants and refugees were handed over to the Libyan Coast Guard by the ship “Vos Triton”, sailing under the flag of Gibraltar.

“Vos Triton” had rescued the group in international waters during their attempt to reach Europe on 14 June. On 15 June, the Libyan Coast Guard returned them to the main port of Tripoli, from where they were taken into detention by the Libyan authorities.

The two organizations reiterate that no one should be returned to Libya after being rescued at sea. Under international maritime law, rescued individuals should be disembarked at a place of safety.

IOM and UNHCR staff are in Libya, providing life-saving humanitarian assistance. However, the agencies reiterate that the basic preconditions to ensure the safety and protection of rescued migrants and refugees post disembarkation are lacking; therefore, Libya cannot be considered a safe place.

In the absence of predictable disembarkation mechanisms, maritime actors should not be obliged to return refugees and migrants to unsafe places. IOM and UNHCR call on States to coordinate so that merchant vessels rescuing people in distress are granted swift permission for disembarkation in a place of safety, to avoid lives being placed at risk.

The Libyan Coast Guard has returned more than 13,000 people to Libya this year, already surpassing the number of people intercepted or rescued and disembarked in all of 2020. Hundreds of others have perished at sea.

The continuing departures from Libya highlight the need for a predictable rescue and disembarkation mechanism along the Central Mediterranean route, with immediate effect and in full compliance with international human rights principles and standards.

Migrants and refugees disembarked in Libya often end up in appalling conditions where they may be exposed to abuse and extortion. Others go missing and are unaccounted for, raising fears that some may have been channeled into human trafficking networks.

IOM and UNHCR call for an end to arbitrary detention in Libya, through the establishment of a judicial review process, and advocate for alternatives to detention starting with the immediate release of the most vulnerable.

Download logo
Over 270 migrants and refugees handed over to the Libyan Coast Guard by the ship “Vos Triton” disembark in Tripoli. Photo: IOM 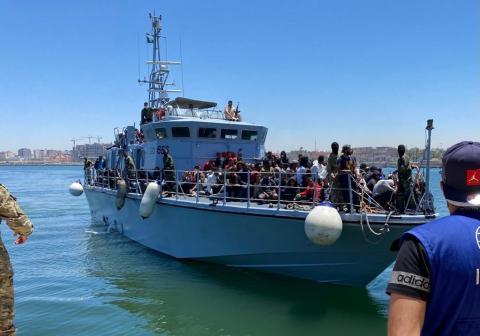