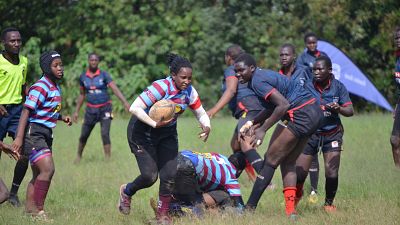 The Uganda women rugby teams got back into action over the weekend with Northern and Eastern region playing on Saturday 24th April 2021 while Central Region teams played on Sunday 25th April 2021. With two rounds played, Kitgum Queens, Black Pearls, Mbale Eagles and Blue Whales top the table in their respective categories.

Charlotte Mudoola of Black Pearls and Bushira Namutebi from Black Diamonds emerged the golden boot winners for the tier 1 and 2 categories respectively. The top try scorers from the central region tournaments were Ira Isabella from tier 2 and Charlotte Mudoola from tier 1.

The Northern region had their first round of the 10s in Kitgum on 24th April 2021 at Bomah grounds featuring Kitgum Queens, Gulu Sprinters, and Lira Matarix. Kitgum Queens won the tournament and Adongpiny Mercy was the MVP.

‘’Last weekend’s performance from all teams was exciting and there’s great improvement in the second round compared to the first one. The future of women’s rugby is indeed secured and this only means we will have to emphasize continued participation of these teams to keep them in the sport. We also encourage clubs to take up the spirit of organizing tournaments for the betterment of women’s rugby in Uganda.’’- Beatrice Atim, Women’s Rugby Development Officer