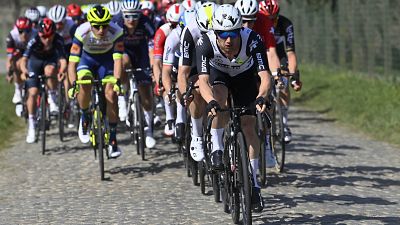 After a strong showing in the Flanders Classics that have led up to “De Ronde”, Team Qhubeka ASSOS (www.TeamQhubeka.com) will take the start on Sunday with confidence and the determination to race from the front.

The Italian & European Champion, Giacomo Nizzolo, who has been in scintillating form of late (4th at Brugge-De Panne, 2nd Gent-Wevelgem and 15th at Dwars Door Vlaanderen) will once again headline our team but it is the strength in depth of our classics squad that will once again define our success on Sunday's race of attrition.

We would like to extend our thanks to long-time Dimitri Claeys “fan” and team supporter, Arno Claeys for his assistance with announcing our team (https://bit.ly/3fCie9g) for the Tour of Flanders.

I am really looking forward to Sunday. It is (Tour of Flanders), in my opinion, the most amazing race on the calendar despite being one of the hardest. After some health trouble during the last few races, I finally feel back to being 100% again and am confident of being able to do a good race. The team also looks really ready, how we have raced in the last classics has been impressive, so we will go out there and do it together.

I had a really hard crash on Wednesday at Dwars Door Vlaanderen, but as a Belgian, the opportunity to race De Ronde van Vlaanderen is a very special occasion. Despite the discomfort I have, I will certainly be giving my 100% effort for the team on Sunday, and with some strong guys that are in-form, hopefully we can do a good race and achieve a top result.