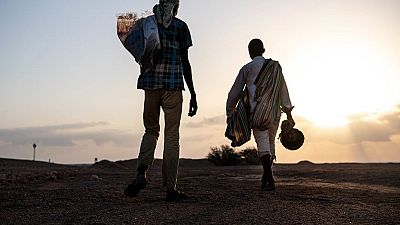 A partnership between the European Union (EU) and the International Organization for Migration (IOM) is marking four years of supporting over 12,000 vulnerable migrants, including children, to voluntarily return and re-establish their homes across the Horn of Africa.

Over half that total—some 6,300 men, women and children—are migrants assisted to voluntarily return to their countries of origin in Ethiopia, Somalia, Sudan, Djibouti, Kenya, Uganda and South Sudan; having been stranded and detained in places like Libya.

Those returnees are among the over 8,200 who received support to reintegrate into their communities. The programme, the ‘EU-IOM Joint Initiative for Migrant Protection and Reintegration’ (the EU-IOM Joint Initiative), has to date committed over EUR 56 million providing for migrants in the Horn of Africa.

The start of the COVID-19 pandemic in 2020 exacerbated risks experienced by migrants. As hundreds of air, land, and sea border closures were put into effect, those on the move in the region increasingly began using new and riskier migration routes. Migrants also experienced increased exploitation by smugglers. According to IOM’s Missing Migrants Project, 58 migrants died in the region on land at sea in 2020, many by choosing these dangerous journeys.

The EU-IOM Joint Initiative is responding by increasing its assistance for the rehabilitation of supporting infrastructure in Djibouti – a key transit location – including the operation of mobile health clinics for migrants on the move.

“The programme has gone a long way in bringing different parties towards the common goal of saving lives and allowing many of those who had been stranded to start afresh. It is fulfilling a critical need in a region with significant migration movements,” said Mohammed Abdiker, IOM’s Regional Director for the East and Horn of Africa.

The EU-IOM Joint Initiative is also being implemented in West and Central Africa, and North Africa. The programme was launched in 2016 and followed on the Valetta Summit priorities and the urgent need to protect and save migrants’ lives. The EU-IOM Joint Initiative was subsequently expanded geographically and in scale to a trilateral partnership with 26 countries straddling key migration routes in the three regions.

By the time they arrive in their communities of origin in the region, many migrants will have received life-saving support through Migration Response Centres (MRCs) that provide food, medical care, shelter, counselling and other essentials in Djibouti, Ethiopia, Somalia and Sudan. The MRCs are located along the main routes in the Horn of Africa and are supported by the EU-IOM Joint Initiative, together with other funders.

Forty community projects targeting a total of 217,000 individuals are earmarked for the Horn of Africa, including a fruit tree nursery in Sudan; production of fodder, seed and sisal fibre in Ethiopia; and the rehabilitation of local government offices in Somalia.

In late February 2021, an agreement was signed with the Inter-Governmental Authority on Development (IGAD) to strengthen cross-border child protection response in the region. The programme has also funded three experts assigned to the African Union Commission who will work in migrant protection and labour migration.

“We are pleased that the secondees are already making an impact in strengthening cooperation with the AU and working to mobilise support for migrants,” said IOM’s Senior Programme Coordinator Julia Hartlieb.

The EU-IOM Joint Initiative in the Horn of Africa is due to come to an end in 2022.

Download logo
Migrants walking through Djibouti, a transit country for those heading to the Arabian Peninsula. Photo: IOM 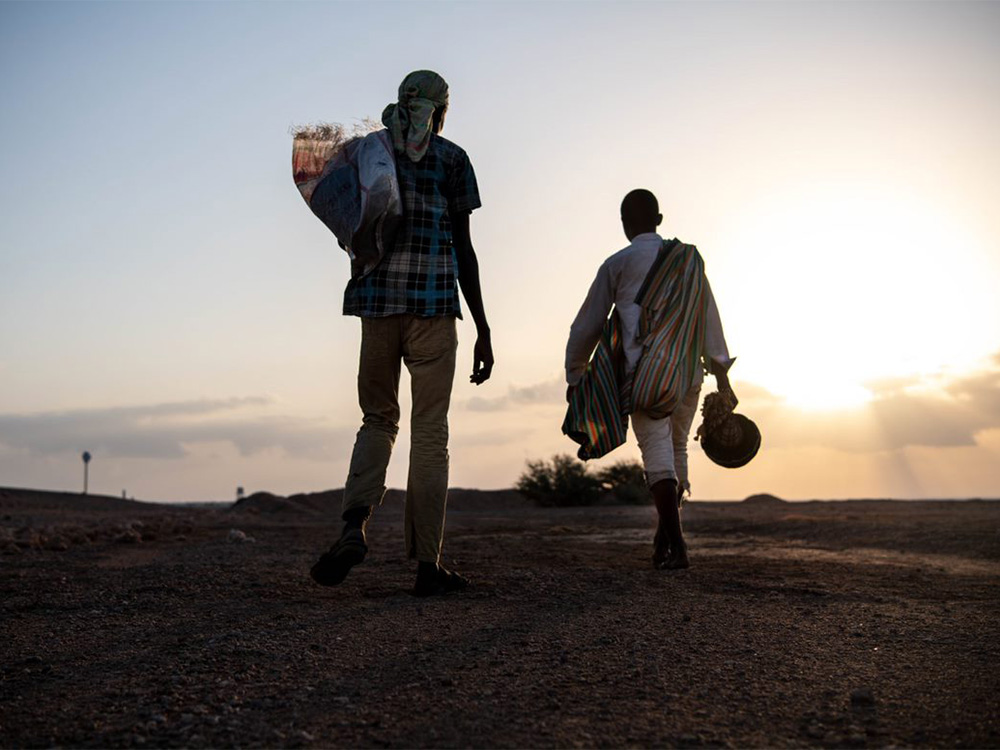