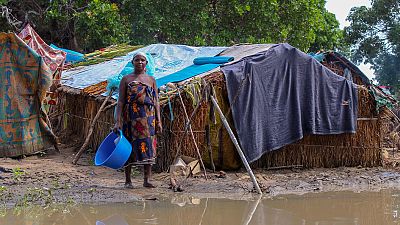 Senior leaders with the UN refugee agency, UNHCR, warned on Monday of the urgent need  to address the growing humanitarian crisis in the Cabo Delgado province in northern Mozambique, where an ongoing  insurgency has uprooted  hundreds of thousands of people.

Assistant High Commissioners Gillian Triggs and Raouf Mazou were fresh from the country, where they heard shocking stories from survivors of a crisis that is unfolding in the context of the COVID-19 pandemic and the aftermath of several devastating cyclones.

The violence is escalating, they told journalists in Geneva, with the number of internally displaced people (IDPs) increasing from around 70,000 roughly a year ago, to close to 700,000 today, and expected to reach one million by June.

“If one looks at the speed at which we are seeing the number of internally displaced persons rise, we know that the window of opportunity that we have is closing”, said Mr. Mazou, who is UNHCR’s Assistant High Commissioner for Operations.

The insurgency began in 2017 and more than 2,000 people have been killed, but it is not clear who the insurgents are, how they are supported, or what they want, according to Ms. Triggs, Assistant High Commissioner for Protection.

The “mysterious group” has been responsible for beheadings, killings, rape and other atrocities.

The displaced people, more than half of them children, fled by boat or on land for safer areas further south in Cabo Delgado province.  Most, or around 90 per cent, have found shelter with family and friends in urban areas, or with host communities in villages. The Mozambican Government is developing sites for the remaining displaced people.

The authorities have also moved some people from overcrowded areas to a settlement site, where they are living in primitive conditions, and shelter, food, clothing, as well as water and sanitation, are desperately needed. Ms. Triggs said while the authorities distributed food there in December, no further distributions have occurred since, either by the Government or the UN World Food Programme (WFP).

She also heard shocking stories of grandmothers caring for orphaned grandchildren, which is now becoming commonplace.

“In this case, the grandmother was caring for a baby, a few months old. Her daughter had been killed in the conflict. The father of the child had been killed, beheaded, And the grandmother was now in this period of grief, trying to care for this child without milk, where they were grinding up root vegetables for the children, giving them diarrhoea and exposing them to all sorts of other things”, she said.

Ms. Triggs reported on some bright spots that have surfaced, including a project to provide the displaced people with official documentation which will allow them to access education, transport and social services.

But with the Mozambican Government saying it is uncertain that people will be able to return home, given the instability, Mr. Mazou pointed to the need for greater international support.  A $254 million humanitarian appeal is only around five per cent funded.

The authorities have established an agency for developing northern Mozambique, he said, in efforts to address some of the root causes of the crisis, which include lack of development and access to resources.

“What we’re facing now is the need for immediate humanitarian assistance. and also to think of the long term for those who may remain in the places where they are now”, he said.

Download logo
© UNHCR/Martim Gray Pereira | Hundreds of thousands of people have been displaced by conflict in northern provinces of Mozambique.