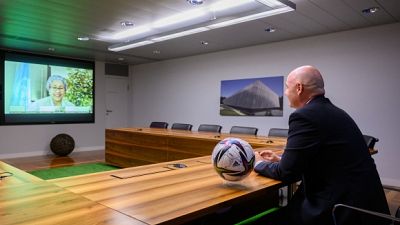 The United Nations Deputy Secretary-General Ms. Amina J. Mohammed had a virtual meeting with FIFA (www.FIFA.com) President Gianni Infantino in which they exchanged views on shared priorities and the importance of urgent actions and commitments to implement the Sustainable Development Goals (SDGs) by 2030. They discussed the role of football as a force for good and a tool for hope, particularly as the world recovers from the COVID-19 pandemic. A number of opportunities for engagement and collaborations were highlighted in the lead up to the FIFA World Cup Qatar 2022, at the World Cup and beyond.

“The United Nations welcomes the collaboration with FIFA, particularly football’s potential in supporting the SDGs,” Ms. Mohammed said. “Our engagement is important to best identify how we can advance the Sustainable Development Goals not only at the global level, but also at regional and local level to ensure no one is left behind.”

The FIFA President agreed, adding that it was important for football to be at the service of society. “It is important for us at the new FIFA to be able to engage with the UN. The new FIFA is a responsible body and a sustainable organisation. It is an organisation that is aware that football goes beyond playing competitions. Football is much more than that.”

The call, which took place on 8 March, International Women’s Day was an opportunity to reflect on the role of the sport in advancing gender equality and building better mechanisms to protect from abuse and marginalisation. Both leaders agreed that while having a vaccine was an important step in the effort to end the pandemic, the vaccine needed to be a people’s vaccine with equitable availability around the world. Ms. Mohammed highlighted the Secretary-General’s call for reimagining multilateralism and need for working with new and untraditional actors around the world to promote the Global Goals and the United Nations Agenda.

The FIFA President spoke about the need to build on positive examples around the world when communities and countries came together, how football can support the recovery process, and also the role that football can have in education.

“The common language of football works everywhere, and it is in the DNA of the new FIFA to be open and we will use our competitions to get the message across,” the FIFA President said. “Through the Football for Schools programme and via a new African schools tournament programme, our focus is not only on football. FIFA strongly believes that through football, you can speak about everything, as it teaches children about values and rules, and we want to use football’s force for education.”

The two leaders concluded by agreeing to strengthen existing relationships and to develop further plans in relation to the SDGs. 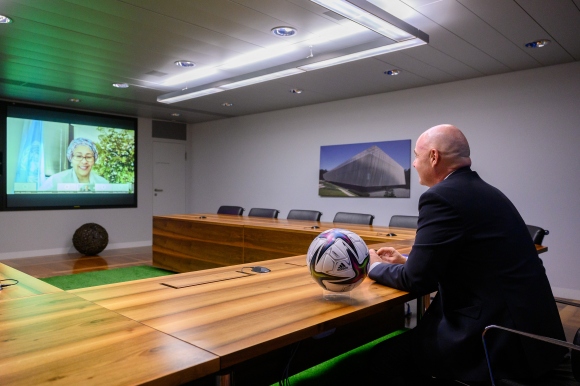