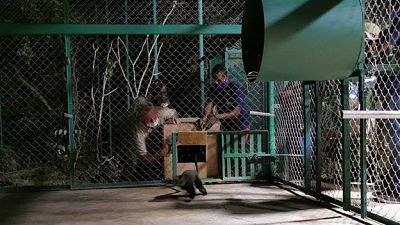 The Jeunes Animaux Confisqués au Katanga (J.A.C.K.) sanctuary (www.JackSanctuary.org), after months of coordinated international effort, welcomed 20 monkeys to their new home. The monkeys, all native to the Democratic Republic of Congo, were confiscated in September 2020, disrupting a wildlife trafficking operation running between the Democratic Republic of Congo (D.R. Congo) and South Africa. This is a historical event and is the first such operation in Africa, where the animals were repatriated back to their native origins.

While crossing the border from Zambia into Zimbabwe, the traffickers were apprehended by the Zimbabwean ZRP/MFFU Officials. When the traffickers could not produce the necessary permits, the Zimbabwean officials moved quickly to confiscate the animals and arrest the traffickers. The arrested persons namely: MBAMBI John, MSIWA Overton, BEGOEX Nzeyi Okitelanga and BULANGONGO Ekaye, were arrested and charged for being in contravention of Zimbabwean laws, as they were unlawfully carrying monkeys of rare species from the D.R. Congo to the Republic of South Africa.

The four men were charged and tried at the Magistrates Court in Karoi and were found guilty on all 3 counts they were charged with. The Court ordered that they pay $6000-00 or alternatively stay 6 months in prison. Given their foreign nationalities, they are awaiting deportation to their respective countries, and the monkeys were forfeited to Zimbabwe pending repatriation to the DRC. A huge congratulations goes to the Zimbabwean judiciary for understanding the importance of this case as well as the need for repatriation of the monkeys.

During the repatriation process the monkeys were cared for by Zimbabwe Parks and Wildlife Management Authority, with support from the, the Chirundu Anti-Poaching Unit, and Hemmersbach Rhino Force together with the Tikki Hywood Foundation.

The Pan African Sanctuary Alliance (PASA) (https://PASA.org), a network of 23 primate sanctuaries across 13 African countries, was quickly alerted when the animals were confiscated.

“A truck smuggling so many primates is almost certainly part of a wildlife crime syndicate,” said Gregg Tully, Executive Director of PASA. “So we knew this was a significant rescue – in fact, it’s the largest in PASA’s 20 year history.”

This has been one of the biggest illegal wildlife trafficking cases uncovered in Zimbabwe and one which has led to the better understanding of how the illegal wildlife trade is changing and how laws must be adjusted going forward to accommodate cases such as this within the structure of the different country’s legislation. The success would not have been possible without the coordinated and combined efforts of the Zimbabwe Republic Police, Zimbabwe Parks and Wildlife Management Authority, The National Prosecuting Authority of Zimbabwe, and the Department of Veterinary Services.

J.A.C.K. received authorization from the Congolese government to be the official repatriation site. Franck Chantereau, founder and chair of J.A.C.K., worked with a joint mission of leaders at the ICCN, which is tasked with the protection of wildlife by the Congolese government, and the Governor of the Haut Katanga Province. Together with the Provincial Minister of the Environment, they negotiated with their counterparts in Zimbabwe to work out the logistics of the rescue.

In addition, non-governmental organizations assisted to make sure this operation was successful both in the DRC and in Zimbabwe these groups included Conserv Congo, a nonprofit in D.R. Congo which investigates wildlife crime. And in Zimbabwe the Chirundu Anti-poaching Unit, Hemmersbach Rhino Force and the Tikki Hywood Foundation.

“International rescues are quite challenging,” said Chantereau. “But working together and being patient yet persistent were the qualities we needed to be successful.”

In late January of 2021, Chantereau, the Congolese  Provincial Minister of the Environment, an ICCN representative along with the J.A.C.K. veterinarian, drove to Zimbabwe to retrieve the monkeys. At the Chirundu border post, where the monkeys were first confiscated, custody of the animals transferred to the DRC team. They arrived back to DRC thanks to a truck kindly sponsored by  Hemmersbach Rhino Force just before curfew and began to release the animals.

“The next morning,” said Chantereau, “it was wonderful to see the enclosures full of monkeys! They were running, playing, jumping.” He noted that the monkeys were still quite small and were probably very young when they were poached.

This case represents a victory in the fight against wildlife crime.

Download logo
Franck Chantereau releases the first of the rescued monkeys into the enclosure at J.A.C.K. Sanctuary 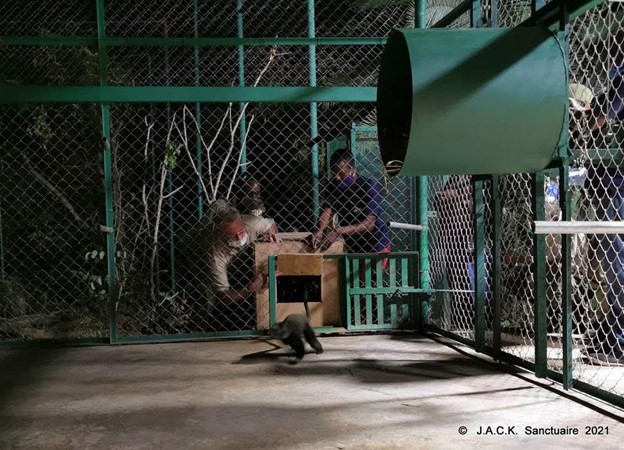