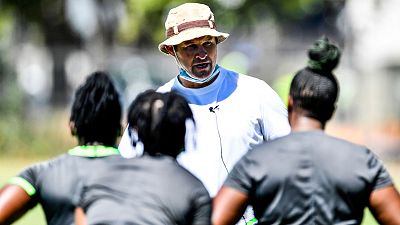 The Springbok Women had a memorable International Women’s Day on Monday with a visit by Springbok scrum coach Daan Human as they continue their preparations in Stellenbosch for the Rugby World Cup.

World Rugby announced last week that it had decided to recommend the postponement of the Rugby World Cup, which was scheduled to be hosted between 18 September and 16 October in New Zealand, until next year due to the evolution of “the uncertain and challenging global COVID-19 landscape”.

The recommendation will be considered by the Rugby World Cup Board and World Rugby Executive Committee in the next two days.

This, however, did not prevent Springbok Women’s coach Stanley Raubenheimer and his team from charging ahead with their preparations, which kicked off with an early morning conditioning session followed by a mid-morning field session and an intense workout in the gym later in the day.

“I’m fortunate to be back here (in the Springbok Women’s camp),” said Human.

“I really enjoy my time here. We haven’t been able to coach for a while due to the COVID-19 pandemic, so it is a privilege to be back coaching again.”

Commenting on the Springbok Women’s development, Human said: “The progress they are making is evident. They have been getting better, and I told the players that early in the field session.

“They are steadily improving in terms of their fitness and conditioning, and they are definitely on the right track.”

“I would like to wish all women and women in rugby a happy International Women’s Day,” said Booi.

“My advice to women in rugby is to keep working hard.

“You can be a great player if you give everything, maintain a high level of discipline and keep believing that no matter what you commit to, the rewards will follow at the end of the day.

“Don’t stop believing in yourself and always be the best version of yourself.”

Latsha also shared inspirational words on behalf of the team, saying: “We at the Springbok Women would like to wish ladies all over the world a happy International Women’s Day.

“We thank you for being courageous and giving us as young women the courage to pursue our dreams with valour and passion.

“Thank you for being our inspiration as we continue to power forward to change the narrative of women all over the world.”

The Springbok Women will remain in Stellenbosch until the end of the month with an eye on putting effective structures in place to compete on the international stage.

The group of players participating in the camp will expand from 24 to 40 players next week, as several players with fulltime jobs join their team-mates in Stellenbosch.