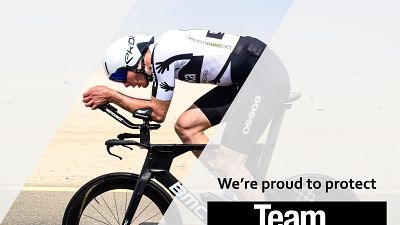 Busby, which as of August 2020, is the only automatic incident response app globally, works with the sensors in your phone to ensure your safety. If a user is involved in an incident the app will begin a 30 second countdown to move or respond and if there is no movement or response  their exact location is sent to emergency contacts so help can arrive quickly.

In order to prevent incidents Busby also alerts other nearby road users that a cyclist is nearby to raise awareness. In only a year of operation, Busby’s app has been downloaded by tens of thousands of people in over 85 countries globally.

Team Qhubeka ASSOS, formerly NTT Pro Cycling, races at the very highest level of sport which includes the Tour de France, Giro d’Italia and the Vuelta a España, together with the sport’s key stage races and the one day races including the five Monuments of cycling.

The organisation also includes our under 23 development outfit, Team Qhubeka, which is based in Italy and races under a UCI Continental licence.

Not only is the team a high performance sporting outfit but is it is also a purpose-led organisation, highlighted by its long-standing partnership with the Qhubeka Charity and the philosophy that bicycles change lives.

The collaboration between Team Qhubeka ASSOS and Busby will see not only the cyclists but the team behind them get a free premium Busby subscription which provides users with additional safety on the roads such as incident detection, incident prevention, near-miss reporting and an SOS Busby flare feature if a rider needs medical or mechanical support.

“Running a cycling team is like where business is today, a hybrid working environment where you don’t physically see people every single day. And then when your team or business is built with people and is about high performing individuals; knowing where they are and if they are safe is paramount to them doing their job and us doing ours.

“This is the reason Team Qhubeka ASSOS is partnering with Busby, the best cycling app for road safety, for both our staff and riders. It gives us peace of mind, our families peace of mind and makes us more responsive for medical or mechanical assistance. You’re never alone with Busby.”

“This is certainly a milestone for Busby, our first World Tour Team and we’re absolutely thrilled to help further protect Team Qhubeka Assos and their staff members whilst they are on and off the road.

Road safety is a global issue and the 8th leading cause of death in the world and our mission is to help improve road safety for all vulnerable road users with our technology. The core safety features are free, and with our partnership with Team Qhubeka Assos we want to push Busby across Africa and help protect as many people as possible.

Whether you’re cycling, horse riding, walking to school or going for a run, Busby will be by your side all the way and if (god forbid) something irregular occurs, Busby will recognise it and send your exact location to your loved ones, emergency contacts or your employers so help can arrive as quickly as possible.

We are excited to announce a number of new features in the next month or so such as GroupSafe – keeping users together in a group safely, SmartStart – Busby automatically turns on if you are active, even if you forget to turn it on and the ability for us to pay users for being safe with a digital currency (stay tuned!).”

Busby is available to download for free on iOS and Google Play.