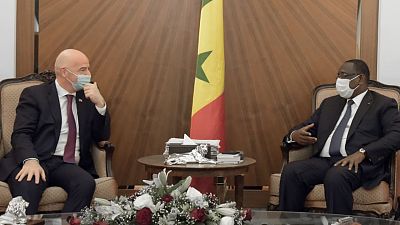 FIFA (www.FIFA.com) President Gianni Infantino has met with Senegal’s Head of State, President Macky Sall, at the Presidential Palace in Dakar on the latest leg of his trip to Africa. Accompanied by Senegalese Football Federation (FSF) President Augustin Senghor, the delegation, which also included FIFA Secretary General and Senegal native, Fatma Samoura, discussed the development of football on the continent and how can FIFA contribute to help its’ African member associations reach the top level at the world stage.
Talks also covered Senegal’s hosting of the Youth Olympic Games in 2026, the first-ever Olympic event to be staged in Africa, as well as the opening of the new stadium in Dakar, which is planned for 2022.
“Senegal has obviously an important role at the international level and I am delighted to see the progress it has been making at all different levels of our sports, including youth and women’s football,” added the FIFA President, who also took to opportunity to invite President Sall to visit FIFA’s headquarters in Zurich at the next possible occasion.
“I appreciate the constructive exchange with the FIFA President in order to address the situation in Senegal and also on our continent,” said FSF President Augustin Senghor. “We face challenging times at the moment especially with the coronavirus pandemic, and I appreciate the support that the FIFA President has given Africa as well as by his presence with us in Dakar.”
“President Sall is a huge football fan and of course a proud supporter of the Teranga Lions, and I was especially pleased to discuss with him the solid steps taken by the FSF and its President Augustin Senghor to consistently improve football in Senegal, which is a great football country not only in Africa, but at a world level,” Gianni Infantino said. “We also talked about the importance of FIFA and our African football associations working together, in a spirit of cooperation and solidarity for the benefit of the millions of football fans on this great continent.”