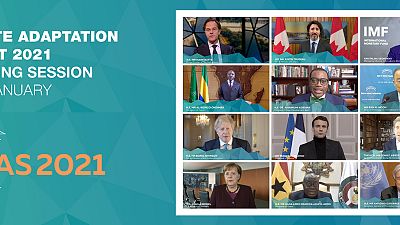 African Development Bank (www.AfDB.org) President Akinwuma A. Adesina announced the launch on Monday of the Africa Adaptation Acceleration Program (AAAP) to mobilize $25 billion to scale up and accelerate climate change adaptation actions across Africa. The announcement came during the Climate Adaptation Summit (CAS) 2021, hosted by the government of the Netherlands and the Global Center on Adaptation.

The AAAP, a joint initiative between the African Development Bank and the Global Center on Adaptation, is expected to scale up innovative and transformative actions on climate adaptation across Africa, Adesina said during the inaugural Ministerial Dialogue on Adaptation Action, held as part of the summit.

The ongoing COVID-19 crisis formed a backdrop to the meeting, a fact Prime Minister Rutte acknowledged in his opening statement. The Netherlands has taken a lead role globally in harnessing the energy and entrepreneurship of the youth and developing nature-based solutions.

“I hope that 2021 will be a year of heightened international ambition and action on climate change, after a difficult 2020, and this conference will help achieve that goal,” Rutte said.

A number of speakers acknowledged Africa’s vulnerability to climate change, as well as Africans’ innovative responses to challenges.

Ghanaian president Nana Addo Dankwa Akufo-Addo said the country was working with the private sector with the assistance of the Green Climate Fund, “to establish a multimillion-dollar green fund to support our climate adaptation interventions and our efforts to transition to renewable energy.”

Adesina thanked Ban Ki Moon for his role in the establishment of GCA’s regional office for Africa in Abidjan last year, which is hosted by the Bank. The African Development Bank head participated in three sessions and outlined a number of Bank initiatives, including the $20 billion Desert to Power project to create a solar zone in the Sahel, the largest in the world.

“Our Youth Adaptation flagship will unlock $3 billion for the youth, support 10,000 youth-led SMEs in climate resilience, and build capacity for one million youth on climate adaptation,” Adesina said.

Adesina also acknowledged that the presence of John Kerry, U.S. special envoy for climate, provided a boost to global climate efforts. “With you in charge, and the strong and palpable leadership of President Biden, we are reenergized on the global agenda on climate change,” Adesina said.

The Global center on Adaptation is a solutions broker to accelerate action and support for adaptation solutions around the world.