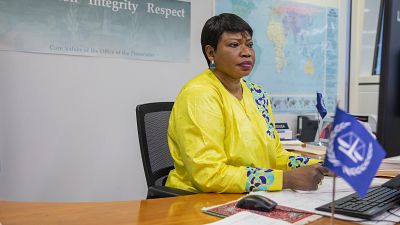 1. I am grateful for the opportunity to again brief the Council via video conference on my Office’s activities in relation to the situation in Libya even as the COVID 19 pandemic continues to present unique challenges across the globe including for the work of my Office. Notwithstanding, we remain resilient and productive in the face of these challenges and I am pleased to present my latest report to this august body.

2. I congratulate Saint Vincent and the Grenadines on assuming the Presidency of the United Nations Security Council and wish you, Madam President, every success in steering the essential work of this Council for the month of November.

3. On 23 October 2020, we witnessed the signing of the ceasefire agreement by Libyan parties in Geneva under the auspices of the United Nations.  This is indeed a welcome concrete development. We call on the parties to assiduously implement the agreement to usher in the much awaited peace and stability for the people of Libya.

4. Victims of atrocity crimes in Libya must be reassured that notwithstanding any ceasefire or future agreement, individuals alleged to be responsible for serious crimes falling under the jurisdiction of the International Criminal Court (“ICC” or the “Court”) will be promptly arrested and surrendered to the Court to face charges for their alleged crimes.

5. Libya remains a high priority situation for my Office and our commitment to seek justice and accountability on behalf of the victims remains unshaken. Our investigations have significantly progressed since my last briefing to this Council in May 2020.

6. Notwithstanding the challenges posed by the COVID 19 pandemic, two crucial investigative missions were deployed to Libya to collect additional evidence to further strengthen our cases.

7. As the Council will have noted, on 22 June 2020, I issued a statement following the discovery of multiple mass graves in the city of Tarhunah and the South of Tripoli.

8. My Office is engaging with the national authorities in relation to these mass graves. So far, reports demonstrate that over 100 bodies have been recovered by the authorities involved in exhuming the graves. Many of the recovered bodies had been blindfolded and had their hands tied. I wish to take this opportunity to recognise the significant efforts and important work of all involved in preserving the evidence of these crimes, including the commendable efforts of the Government of National Accord.

9. The missions also provided an opportunity to strengthen mutual cooperation with relevant national authorities and other stakeholders. I express my gratitude and appreciation for the cooperation and support that was received from the Government of National Accord and the United Nations Support Mission in Libya (“UNSMIL”). We continue to constructively coordinate our joint efforts in line with the cooperation and complementarity principles under Part 9 of the Rome Statute.

10. My Office continues to actively monitor the situation in Libya.

11. In this regard, we have received information indicating that the  recently ended offensive on Tripoli  that was carried out by the eastern-based militia known as the Libyan National Army (“LNA”) and its supporting forces, forms part of a pattern of violence that involves the indiscriminate airstrikes and shelling of civilian areas; arbitrary abduction; detention and torture of civilians; extrajudicial killings; enforced disappearances; and pillaging of civilian property, repeating a pattern of violence that has been previously reported in places such as Benghazi, Derna, Ajdabiya, Marzuq and Sirte.

12. We have also received credible information indicating the increased use of mines and improvised explosive devices against civilians. These were discovered following the retreat of forces from Tripoli and its surrounding areas.

13. Mines and improvised explosive devices are reported to have been placed in the garages, kitchens and bedrooms of civilian homes.

14. Many civilians who returned to their homes after fleeing the fighting were either killed or injured because their homes were booby trapped by such devices.

15. The threat posed to civilians by mines and improvised explosive devices and the scale of their use is deeply disturbing. Between May and July alone, at least 49 people were killed as a result of the use of mines.

16. Let me emphasize that it is a crime under the Rome Statute to use mines and improvised explosive devices as a means to indiscriminately attack civilians.

17. I encourage this Council and all Member States of the United Nations to once again convey a clear and firm message to commanders, be they military or civilian, and all parties and armed groups involved in the Libya conflict that the rules of international humanitarian law must be respected and that those who defy such rules will be held individually responsible.

18. My Office has also been following reports of the targeting of civilians that voiced opposition to militias in the east and west of Libya. In this regard, the Council is aware that UNSMIL has recently called for an investigation into the alleged use of excessive force by security forces on the 23rd of August in Zawiyah and Tripoli.

19. In addition, my Office continues to receive information regarding allegations of serious crimes being committed in prisons and detention facilities throughout Libya. In my previous report to the Council, I outlined allegations that detention facilities such as Al-Kuweifiya and Gernada in eastern Libya and Mitiga Prison in Tripoli, which is controlled by the Special Deterrence Force, were being used to arbitrarily detain civilians under inhumane conditions including allegations of torture. My Office continues to receive evidence of such allegations.

21. My Office has also been monitoring the situation of internally displaced persons as well as crimes committed against migrants. Regrettably, migrants continue to be trafficked and subjected to crimes such as torture.

22. I am deeply concerned that despite this Council imposing sanction on Mr Ahmad Oumar Al-Dabbashi, for his involvement in crimes against migrants, he is reported to continue to commit crimes.

23. Recent positive developments in the fight to eradicate crimes against migrants are encouraging and must be intensified. In this regard, I note the imposition of sanctions by the European Union against Mr Mousa Adyab, who the United Nations Panel of Experts implicates in human trafficking, rape and the killing of refugees.

24. I also welcome the efforts made by national jurisdictions in this regard and in particular the sentencing by the Court of Messina in Italy of three individuals to 20 years of imprisonment for crimes committed against migrants in Zawiyah.

26. These include two arrest warrants for Mr Mahmoud Mustafa Busayf Al-Werfalli, who as a commander of Al-Saiqa Brigade, is alleged to have executed 43 civilians. On 21 September 2020, the European Union imposed economic sanctions on Mr Al-Werfalli for alleged crimes committed in Libya.

27. My Office’s request to the leader of the LNA, General Khalifa Haftar, to arrest and surrender Mr Al-Werfalli to the ICC has gone unheeded.

28. I again call on other Libyan commanders to take all the necessary steps to surrender Mr Al-Werfalli. Most recently, I  specifically called upon Mr Aqila Saleh, Supreme Commander of the LNA and Mr Wanees Boukhmada, Commander of Al-Saiqa Brigade to help in this regard.  My Office has since received information that Mr Wanees Boukhmada is deceased. It is nonetheless imperative that the efforts to arrest and surrender Mr Al-Werfalli must be continued and intensified.

29. Let me recall and stress the obligation imposed on commanders under article 28 of the Rome Statute to prevent or punish the commission of crimes by forces under their effective control or to submit them for effective investigation and prosecution.

30. Similarly, arrest warrants against Mr Saif Al-Islam Gaddafi and Mr Al-Tuhamy Mohamed Khaled remain unexecuted. Mr Al-Tuhamy is still alleged to be in Egypt. I urge all relevant states, including the Arab Republic of Egypt to ensure that fugitives wanted by the Court are surrendered without delay.

31. The non-execution of the arrest warrants is the foremost obstacle to our collective capacities to give hope to the people and victims of crimes in Libya. I urge this Council and Member States to take effective and concrete steps to ensure that safe havens are not provided to fugitives from justice who face serious criminal charges before the International Criminal Court. Inaction in this regard allows abhorrent crimes that are alleged to have been committed in places such as Tarhunah to continue. There is a collective responsibility to ensure ICC warrants of arrests are duly executed.

32. In all other respects, my Office continues to receive strong cooperation from numerous States and stakeholders. In particular, our relationship with UNSMIL and authorities in Libya has strengthened, as has our relationship with EUROPOL. I would like to reiterate the pivotal importance of this cooperation in our activities and call on the Council and the Member States to collectively support our efforts to strengthen such cooperation.

33. My Office further continues to provide assistance supporting the domestic investigation and prosecution of international crimes committed in Libya in line with our Strategic Goal 6.

34. I remain committed to fulfilling my mandate with the aim of holding to account those responsible for the most serious crimes of international concern, and seeking justice for the victims in Libya.

35. This Council, as well as the international community, is once again urged to provide full support to the ICC to achieve its mandate in Libya.

36. Let me conclude, Your Excellencies, with a final reflection. As we gather here today pursuant to UN Security Council Resolution 1970 (2011) to demonstrate our joint commitment to cause of justice in Libya, I must contextualise this engagement.

37. We find ourselves in an age where powerful forces increasingly aim to undermine the cause of international criminal justice as continuation of politics by other means.

38. What is required, today, more than ever, is greater support for the ICC, its independent and impartial work and the international rule of law; not less.

39. Any act that may undermine the global movement towards greater accountability for atrocity crimes and a ruled-based international order must be avoided.

40. I count on the support of the international community, this Council and its membership to stand firmly in the defence of international criminal justice in Libya and beyond, as necessary means to ensure international peace and security, and to advance the cause of justice for the victims of atrocity crimes.

41. I thank you for your attention.

Twenty report of the Prosecutor of the International Criminal Court to the United Nations Security Council pursuant to UNSCR 1970(201) (https://bit.ly/35hMznU)

Download logo
Due to COVID-19 restrictions, ICC Prosecutor, Fatou Bensouda, presents her Office’s 20th report on the Situation in Libya to the UN Security Council, remotely through VTC ©ICC-CPI (1) 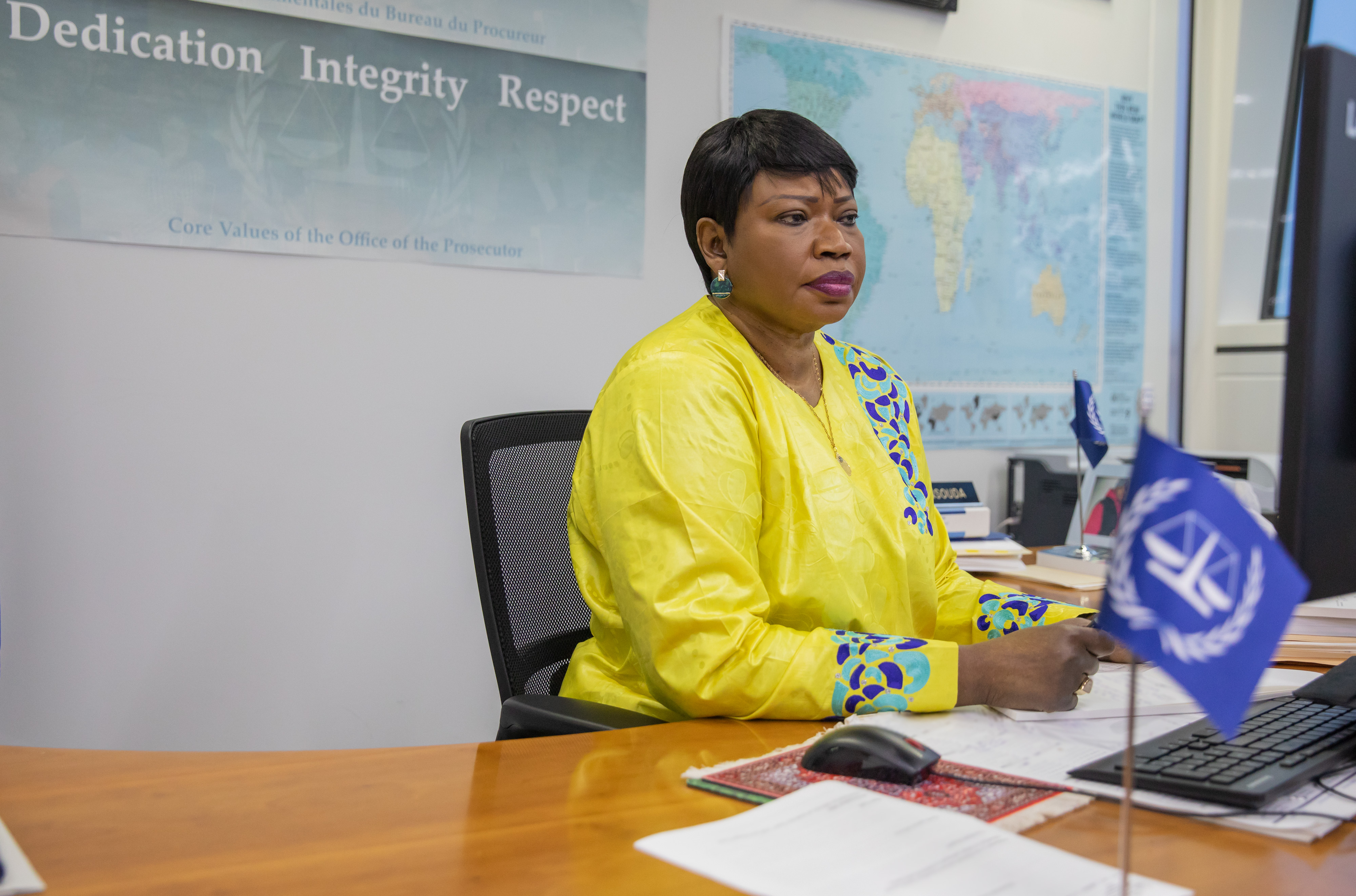