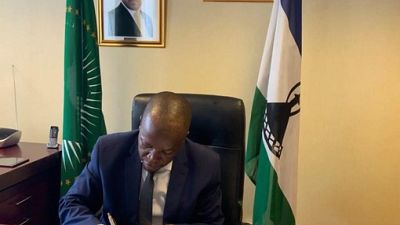 The African Risk Capacity (ARC) Group and the Government of the Kingdom of Lesotho have signed a Memorandum of Understanding (MoU) to address persistent climate risks and scale up national disaster risk management and financing efforts.

The MoU serves as a framework to facilitate cooperation and collaboration between ARC Group and the Government, and to set out the terms and conditions under which the Government and the ARC Group will work together to address the impact of Extreme Weather Events in Country, including through support provided by ARC Group to the Country, training of Government personnel and other efforts in support of Country’s objectives.

With threats of prolonged drought, the Kingdom of Lesotho is highly vulnerable to climate risk. During the drought that affected Lesotho over the 2019/20 season approximately 500,000 people-a quarter of Lesotho’s population – with at least 433,000 in rural areas– faced severe hunger due to droughts that caused a 60% fall in cereal production last year, compared with 2018.

Commending the Government of the Kingdom of Lesotho for signing the MoU, the UN-ASG and Group Director-General of ARC, Ibrahima Cheikh Diong, indicated that the need for countries to strengthen their disaster risk response capacities using the African Risk Capacity’s model has become more urgent now with the increasing variability of weather patterns and particularly more intense droughts across the continent. According to him, “ARC understands that natural disaster risks are not avoidable, but the consequences could be managed with the right tools such as we effectively deployed in many African countries that have faced similar catastrophes.” Mr Diong added that with the formalisation of the partnership, “ARC will now committedly work with the Government of Lesotho to achieve the aims of the MoU and improve the country’s capacity to better plan, prepare and respond to extreme weather events and disasters for the food security of its vulnerable populations.”

The Government of Lesotho has taken significant steps in addressing its drought disaster risk over the years. In 2016, Lesotho’s drought response efforts were supported following the approval of $20 million in additional financing by the World Bank Group. The additional step helped to improve support the Government’s efforts in providing relief to vulnerable households affected by the devastating regional El Nino drought.

As the newest signatory of the African Risk Capacity (ARC) Establishment Agreement (ARC Treaty) on December 16, 2019, and 34th member state of the ARC, the Government of the Kingdom of Lesotho is taking another step towards the strengthening of its disaster risk management programme by deepening its partnership with ARC.

In its official statement, The Government added that, “The Kingdom of Lesotho will work hard to ensure that the Treaty and the MoU are implemented and that they benefit the people of Lesotho. This MoU will not just be an agreement for the sake of agreement. It will be implemented and produce tangible results,” the statement of the Government of Lesotho further added that “The Government of Lesotho is eager to join efforts with the African Risk Capacity Group to address the persistent climate risks faced by the country, especially in the context of drought”.

Download logo
Hon. Mr. Kemiso Mosenene, Minister in the Office of the Prime Minister, of the Kingdom of Lesotho, signing the MoU with ARC 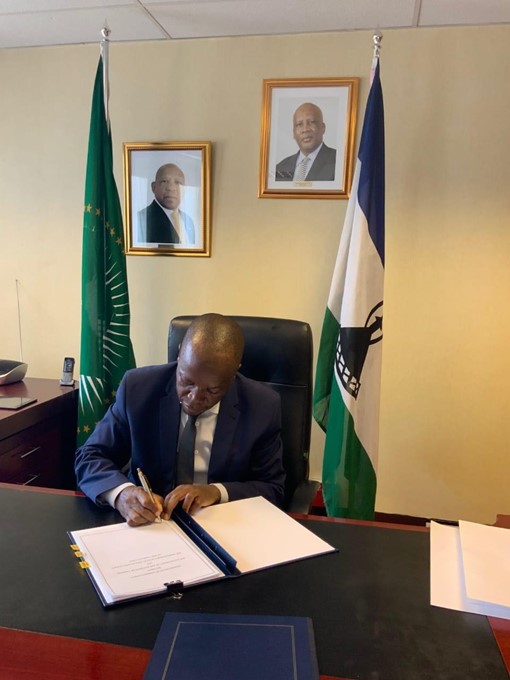