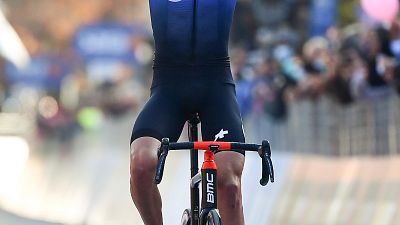 In the process, O’Connor scored NTT Pro Cycling’s first stage win at a grand tour since 2018, in emotional scenes at Madonna di Campiglio.

The 24-year-old Australian, along with teammates Louis Meintjes and Amanuel Ghebreigzabhier, crucially formed part of the day’s 18-man breakaway from which he eventually made the winning move.

With 8km to go O’Connor took control of the race and soloed to an incredible victory, raising his arms aloft, sparking wild and emotional celebrations at the finish line.

O’Connor’s victory comes just a day after he placed second in stage 16, confirming a rich vein of form at a time that’s crucially important to the team as it looks to secure its future.

To finish off a brilliant day for the team, Domenico Pozzovivo safely navigated himself to the finish ensuring that on a potentially difficult day he secured his 8th position on the general classification.

Yesterday I was pretty disappointed but I think that I’ve said before that I was very happy with how I raced. Today I think I was the strongest in the race, at the front, and I managed to pull it off.

My tears at the end were just a bit of pride, yesterday it was so close and I was just missing a bit in the end, but I think it’s easy to be inspired when the people around you need inspiration. I think our team really needed this win, I really needed this win as did my family and friends, who put a lot of faith in me.

I think I cried as it was a sense of overwhelming relief because the amount of effort and work that not just I put in but everyone around you does. Just from yesterday there was so much support that it would have been a shame not to try again.

I’m quite emotional as a person and it just means a lot because of everything this year, I guess it’s been an incredibly tough year for a lot of people and when you have such joy what else can you do but cry.

You know the team situation, everyone does, and it’s not good but it’s racing like we are now which gives hope to the team and to everyone as it’s proof that we can do it: as our bus driver says it’s a little bit of “grinta”.

What an amazing stage for Ben, and a brilliant stage for our team. This is something that we’ve worked so hard for as a team.

For this race, as we went into the Tour de France with expectations to win stages and ride fairly high in the general classification, the team showed that even through its struggling times to find a new title partner, there is complete unity and that everybody’s committed to each other.

Today having three riders in the breakaway all supporting each other, and then with Ben clearly the strongest after finishing second yesterday and feeling so disappointed in himself and then getting up again today and doing what he did shows his character. It showed how committed every single one of these individuals is to try and make a result and support the team that’s supported them over the years, it’s just a beautiful story.

To win here, on a climb that some big names in the sport have done, I’m just so happy for Ben and of course for the team.