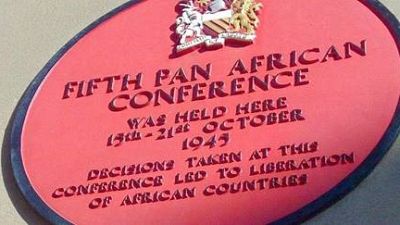 Invited by the universities of Manchester and Salford, H.E. Dr Amani Abou-Zeid, Commissioner for Infrastructure and Energy delivered the keynote address to the symposium celebrating 75th anniversary of the fifth Pan-African Congress that took place in Manchester in October 1945 — a milestone event which brought together then intellectuals and activists such as W.E.B Du Bois, Kwame Nkrumah, Nnamdi Azikiwe and Jomo Kenyatta. The Congress was a springboard for these future leaders in connecting with each other and developing new national strategies towards self-rule and decolonization.

The AU commissioner paid tribute and emphasized the struggle of the founding fathers and mothers of African liberation leading to independence, and their call for African unity and integration which laid the foundations for the OAU, and later, the African Union in 2002.

Dr Abou-Zeid mentioned that Afro-pessimism of the 1990s was replaced by “Africa Rising” thanks to decades-long reforms and deliberate decisions and that Africa turned the corner of marginalization.

The Commissioner further spoke about how African women today are the motors of African economies and made significant progress in access decision-making positions in education, employment, finance and technology. Even though many challenges and barriers still exist, she ensured that women empowerment is being addressed in AU infrastructure programnes planning and implementation. In this regard, the second phase of the African Union Programne for Infrastructure Development (PIDA PAP II) has, for the first time, included gender responsive criteria for project selection. In addition, the AU established the African Network for Women in Infrastructure (ANWIN) to ensure the gender sensitivity and responsiveness of Africa’s infrastructure at every step of the value chain.

The AU Commissioner expressed her pride with Africa’s youth “our most valuable asset and resource” saying that “despite enormous challenges, we have already seen innovation, resilience and agility amongst our young people. They are sources of ingenuity and engines of productivity and creativity”. She noted that the labour market of the future requires new skills including digital fluency, creative thinking, problem-solving, collaboration, empathy and adaptability. With these new demands in place, it would be remiss of Africa not to strengthen our biggest asset. It is with that in mind that efforts are doubled to implement the AU Digital Transformation Strategy, especially when it comes to broadband connectivity send skills development which enabling African youth to leverage the new entrepreneurial and economic opportunities associated with the digital economy.

Commissioner Amani Abou-Zeid shared with the distinguished audience the challenges of infrastructure in Africa as well as ways AU programmes are addressing those challenges to harness Africa’s enormous potential to the benefit of every African. The African Union Commission (AUC), in collaboration with its implementing partners – the African Union Development Agency (AUDA-NEPAD), the African Development Bank (AfDB), and the Regional Economic Communities (RECs) has established the Program for Infrastructure Development in Africa. After a successful implementation of its first phase, the second phase PIDA-PAP II, includes digital projects for the first time in addition to transport, energy, water. The criteria for entry have been revised to ensure gender sensitivity, resilience to climate change and smart solutions.

Speaking of Africa’s resilience and recovery from global COVID-19 crisis, AU Commissioner paid a well-deserved tribute to President Cyril Ramaphosa, Chair of the African Union, to the African leaders and to the African Union for the pertinent initiatives taken, the strong expression of solidarity and to the remarkable and prompt manner Africa took and implemented appropriate measures, consistently with a continental strategy. The Commissioner highlighted the actions taken to help restart African air transport, to support tourism, to free bandwidth and avail free internet connections for students among a large number of actions to develop resilience and recovery.

AU Commissioner Amani Abou-Zeid emphasized that decolonization is not a call for isolation from the world. Rather, to put Africa’s priorities, interests and culture first, and that as Africa is taking responsibility of its own development and prosperity, the global North and East must be willing to listen to Africa, to demonstrate solidarity and to forge win-win partnerships. She assured the audience that Africa’s dawn has truly risen. She quoted President Gamal Abdel Nasser, saying: “It is not about forgetting…it is about turning the page”.

The Commissioner ended her address with President Kwame Nkrumah’s quote: “We face neither East nor West; We face forward”.

The 2020 symposium was inspired by the collegiate and collaborative spirit of the original event in 1945 and brought together members of faculty, researchers and experts. The symposium was chaired by Prof Khalid Nadvi, Managing Director of the Global Development Institute and moderated by Dr Admos Chimhowu, Senior Lecturer at the Global Development Institute. 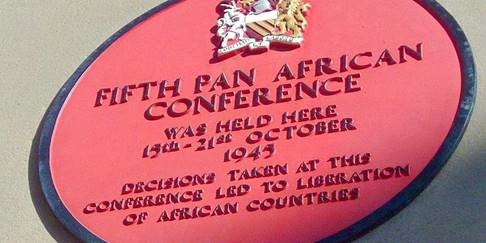