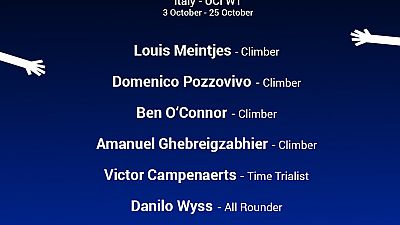 Three individual time trials are a feature of this year's race and with the maglia rosa on the line in the opening stage, our Belgian TT specialist Victor Campenaerts will be our headline act. The race features three opportunities in his favoured discipline including stage 14 and the final stage in Milan.

The 28-year-old comes into the race in good form having recently finished eighth at the World Championships, second at the Belgian championships as well as third at the European championships. He was also second in stage eight of Tirreno-Adriatico.

Our selection features an exciting group of climbers spearheaded by local favourite Domenico Pozzovivo. The 37-year-old Italian has on three occasions finished in the top-10 overall at this race and took a stage victory in 2012.

This race also marks his 20th Grand Tour appearance, having previously appeared 13 times at the Giro d’Italia. Pozzovivo most recently was forced withdraw from the Tour de France on the first rest day after bravely fighting the aftereffects of a crash on the opening stage but has since recovered and trained well in preparation for the start in Palermo.

South Africa’s Louis Meintjes – twice a top-10 Tour de France finisher – will be looking to capitalise on his recent strong form shown at Tirreno-Adriatico where he finished just outside the top-10 on the general classification. He'll be joined by Ben O’Connor who so agonisingly missed out on a top-10 in this race two years ago. The Australian took an impressive stage win at Etoile de Besseges earlier in the year and is now raring to go in his third appearance at the Giro d’Italia.

Eritrea’s Amanuel Ghebreigzabhier returns to the race for a second time and continues to demonstrate that he’s a huge talent that could well see him finally breakthrough in challenging for a Grand Tour stage win. Danilo Wyss completes our set of climbers and will be a key component as he takes an important leadership role for the three-week event.

23-year-old Italian neo-pro Matteo Sobrero will realise a dream by making his bow at the Giro d’Italia and is one to watch out for. Stage 20 will start in his home town of Alba, and one he’s particularly looking forward to.

Meanwhile completing our lineup will be 24-year-old Australian Dylan Sunderland who will play a valuable role in a support role at the race. He made his debut for our team at the Tour Down Under and immediately impressed with his versatility and work ethic.

This race comes at an extremely important time for our team, with the announcement earlier in the week that we are actively seeking a new title partner for 2021 and beyond.

Having won a stage at the Giro in the past, we are extremely excited to once again be at the Grande Partenza and look forward to fighting on all fronts in what promises to be a great race. Moreover, the incredible impact our team continues to have, and make, in changing lives through bicycles with the Qhubeka Charity sees us with a unique opportunity to make a huge difference in the world.

It should be a really good three weeks in Italy and I’m really looking forward to it. Hopefully summer stays around for a little longer and the weather is good as it’s a good course for me – lots of mountains!

I’m just going to go there and make the most of it, I was feeling good at Tirreno so hopefully we can have some good days out there.

I’m really looking forward to a Giro that contains three relatively flat time trials. Filippo Ganna, the recently crowned World Champion, is also competing so it’s going to be difficult to win even one of them but I will try with every ounce of my being, especially the first time trial as there’s a pink jersey on the line; so we will go all in.

I also believe that within the first two weeks there are some chances for breakaways and I’ll try to play a role in making a success of one of those opportunities.

I’m really looking forward to the Giro as my condition is good and I really like this race. It’s going to be my seventh Giro so I really like it and have good memories. I’m ready to fight in what will be a super hard race.

The parcours is tough, like every year, but I’m fully motivated and hoping to take a good breakaway and go for a result in one of the stages and otherwise try to help the team as best as possible. We have a good group here and we will keep the motivation high even if it’s not an easy time right now.

I’m really looking forward to being at the start in Palermo and I hope to reach the second last day where the start of the stage is in my hometown.

I’m ready to rumble and get stuck in! Personally the last two months hasn’t exactly gone to plan but after a really good build-up I’m coming in really confident.

I think that the race already in the first week has got so many different challenges – from time trials to hilltop finishes, to mountain tops and to flat sprints – so it’s pretty clear that if you’re going to be fighting among the top, especially for the overall, you need to be in the mix.

So my eyes are fixed on Etna and I really can’t wait to test myself because I think I can do something really good at this Giro d’Italia.

I’m just so excited to be heading to the Giro for my debut Grand Tour. I’m incredibly proud and I can’t wait to get started with the next three weeks of racing, doing whatever is required of me within the team to make it as successful as possible for the team.

*Details of our media engagement ahead of the race will be communicated separately.

About NTT Pro Cycling:
Founded in 2007, NTT Pro Cycling (NTTProCycling.com) (formerly Team Dimension Data for Qhubeka) became the first-ever African cycling team to gain a WorldTour license, in 2016. With the support of our headline sponsor and technology innovation partner, NTT, we are the most purpose-driven, performance-led, and technology-enabled team in pro cycling today.

About NTT Ltd.:
NTT Ltd. (hello.global.NTT) is a global technology services company bringing together the expertise of leaders in the field, including NTT Communications, Dimension Data and NTT Security. We partner with organizations around the world to shape and achieve outcomes through intelligent technology solutions. For us, intelligent means data driven, connected, digital and secure. As a global ICT provider, we employ more than 40,000 people in a diverse and dynamic workplace and deliver services in over 200 countries and regions. Together we enable the connected future. 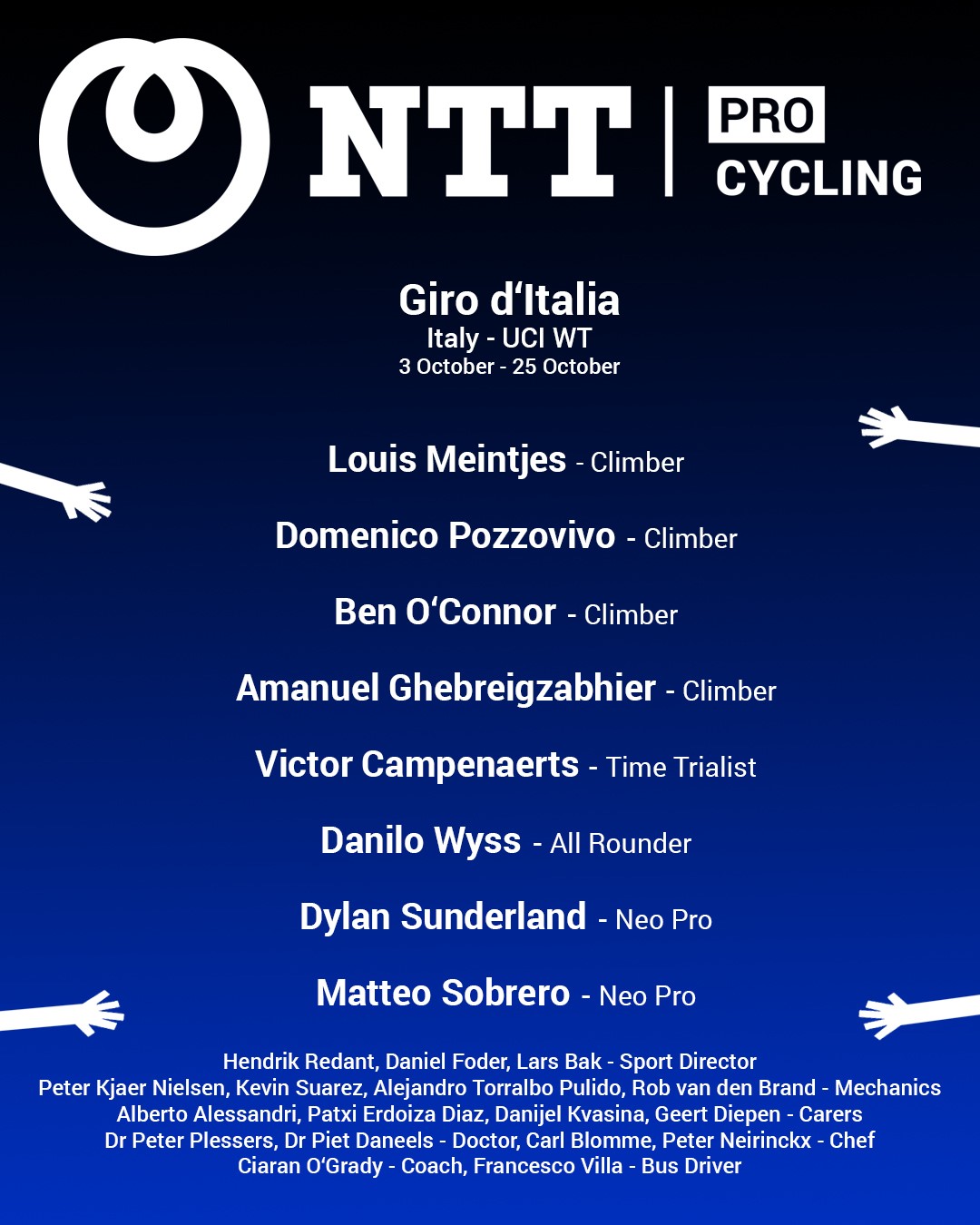