How Angola is boosting oil production

The United Nations Development Programme (UNDP) has gathered an exciting and thought-provoking selection of prize-winning international photojournalists for the 2020 edition of the international photography exhibition Photoville. Their work on the theme, The far-reaching fallout from COVID-19, how a once-in-a-century crisis is re-shaping the world will be on display from September 17 to November 29 at Brooklyn Bridge Park, in New York.

This year’s UNDP exhibit shines a spotlight on the COVID-19 pandemic’s effects as it sweeps over the rich and the poor—from the deserted streets of the mighty economic engine of New York City to the so-called “Sewage Slum” of Nairobi, where some of the world’s most vulnerable people face even more hardship.

Eight photographers poignantly show the true human cost of the pandemic, and how it must force us into a radical re-think; about how we live, how we consume, how we treat the planet, and how we treat each other.

Photoville, put on by United Photo Industries, is an annual international photography exhibition held in Brooklyn, New York. It is the largest annual photographic event in the city and among the most-attended photographic events nationwide. In 2019 it attracted more than 100,000 viewers in ten days.

Ziyah Gafic documents how COVID-19 is adding to the dangers migrants face as they travel through Bosnia and Herzegovina to reach the European Union.

Living in harmony with nature is one of the tenets of Bali society and Nyimas Laula follows Indonesians who lost their tourism jobs and have returned to a traditional life of farming and fishing to feed their families.

The vast majority of Nairobi’s residents live in more than 100 informal settlements and are particularly vulnerable. From interrupted schooling to increased danger for sex workers, Nichole Sobecki has documented the effects of the pandemic on the city’s most vulnerable.

More than 80 percent of Indians work in the informal sector and Dhiraj Singh has witnessed the heartbreaking losses many have faced simply because they were too poor to be able to afford transportation back to their home villages when they lost their jobs.

Even before the pandemic Zimbabwe was struggling with an economic crisis and hyperinflation. Cynthia Matonhodze followed essential supermarket workers who risked their health going to work because they couldn’t afford to lose their jobs.

By late March, New York City had become the epicentre of the COVID-19 pandemic in the United States. When a massive lockdown went into effect, the “city that never sleeps” began a three-month hibernation. Dina Litovsky walked Manhattan’s empty streets after sunset, documenting how the psychic landscape of city was affected by the crisis.

The Fluxus Foto Collective has highlighted Ecuador’s efforts to support education during lockdown using WhatsApp, which allows children and teachers to communicate freely, and send videos, voice, and text messages.

Nadège Mazars took to the deserted streets of Bogotá as the county went into lockdown and the mirage built on the excesses of over-production and consumption fell away. 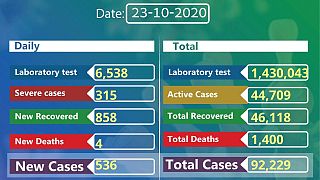