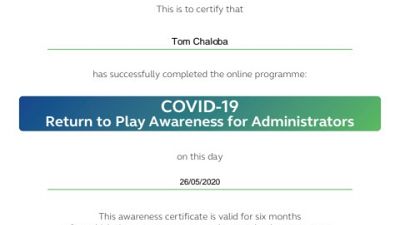 The Zambia Rugby Union (ZRU) (www.ZRU.Rugby) has announced that the 2020 rugby league which had earlier been cancelled is likely to resume in the form of tournaments to be organized by various clubs across the country. This has been confirmed by Director of Rugby (DoR) Noble Sinkamba in an online meeting with other Executive and Secretariat members. He said the Union had earlier written to the National Sports Council of Zambia (NSCZ) indicating their intentions to resume the games. After a thorough review by the Sports Council, a letter of recommendation was generated to the Ministry of Sports and Ministry of Health requesting them to conduct inspections to ascertain the preparedness of clubs and other venues which are to be used once training/play resumes.

Download Safe Return to Rugby – in the Context of the COVID-19 Pandemic Here: https://bit.ly/35UMcAH

“A few months ago, the Zambia Rugby Union in collaboration with Rugby Africa moved across the country visiting clubs distributing Personal Protective Equipment and foodstuffs. This was in an effort to give our players some aid during the Covid19 pandemic lockdown which has affected most sectors of the economy including sports” Noble said.

The Director of Rugby reiterated the fact that for the time being all clubs may only return to training with minimal numbers while avoiding contact once permission from relevant authorities is granted.

He further added that so far the inspectors from the Ministry of Health have finalized their activities in Lusaka based clubs and will proceed to the Central, Copperbelt and North Western Provinces in the next few days to conduct similar inspections in a bid to ascertain preparations.

The ZRU is undertaking the Return to Play protocols as prescribed by World Rugby while not forgetting those required by local authorities in its quest to ensure compliancy. The Union has further called upon all Administrators, Coaches, Referees and Players to do the Covid19 online test found on https://bit.ly/33zcXaT 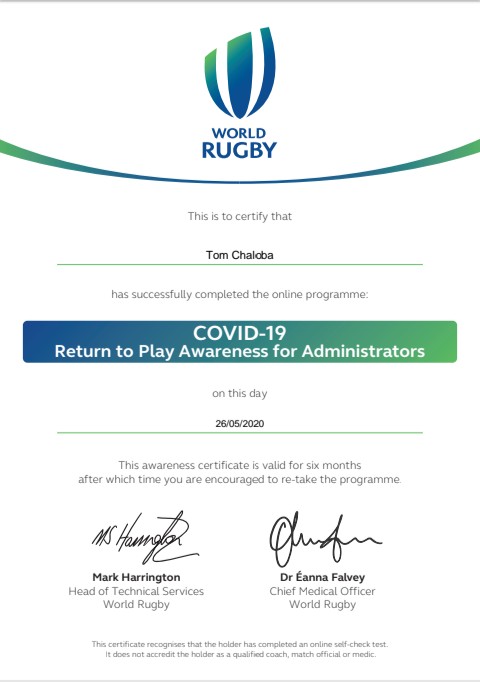