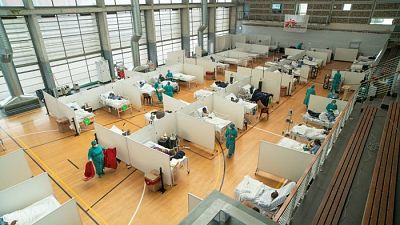 To relieve the immense pressure on the Khayelitsha District Hospital, 17 patients were transferred to the field hospital on that first day. At one point during the period of peak transmission, the facility was caring for 52 people.

Today, health authorities see a slowdown in COVID-19 patients requiring hospital care in the province, with 354 active cases reported for Khayelitsha on 4 August, down from over 1,000 in late June.

Due to this improvement, MSF, along with authorities from the Department of Health, has decided to shut the field hospital. The last patient was admitted on 5 August. The hospital admitted a total of 241 people, of whom 194 were discharged, eight were transferred to other facilities and five remain in care. Regrettably, 34 people died.

The Western Cape was ahead of the COVID-19 curve in South Africa and lessons learned in Khayelitsha are of high relevance as the new coronavirus surges in other low-resource settings in the region.

Be ready when the wave hits

“The most important lesson we learned in Khayelitsha is that reactivity is key,” said project leader, Dr Eric Goemaere

“Unlike the HIV and TB epidemics, which allow more time to react, with COVID-19, if you are not ready when the wave hits, there is no catching up,” he said.

What this meant in practice is that there was insufficient time to develop a stand-alone hospital, “complete with a laboratory, a laundry service and everything in between”.

Originally the Western Cape peak was forecast for August, but because this is an unpredictable epidemic the peak came on sooner, in late July, leaving just a few weeks to set up.

According to Goemaere, it is better to focus on helping existing facilities to increase their capacity to respond.

“This is what happened in Khayelitsha, where MSF entered a partnership with Khayelitsha District Hospital, whereby MSF staffed and equipped the overflow facility but relied on the district hospital for several critical functions,” he said.

Choosing the right response for the context was as important as being ready with a response on time, said Dr Claire Keene, project medical coordinator for MSF in Khayelitsha.

“You have to ask ‘where are the gaps in the system, and if we fill this gap, will it actually make a difference?’” she said, adding that in Khayelitsha, MSF in consultation with health authorities identified a need for beds and care for people with moderate to severe COVID-19, who were either needing oxygen therapy, or had co-morbidities such as diabetes, HIV or TB.

“In other words, instead of investing in costly ICU facilities for just a few people we decided to mount a response that targeted the bulk of those needing medical care from the disease. We feel that this same gap exists across South Africa currently, and that investment at the level of intermediate care is what is most needed,” said Keene.

A high number of patients with co-morbidities were admitted to the field hospital, and according to the medical activities manager, Dr Celeste Jonker, her team had to quickly adjust to the fact that the cases being referred where more complex than anticipated.

“Rapid solutions are needed to tackle coronavirus, but there is a danger of being too focused on COVID. In Khayelitsha, for example, solutions had to be rapidly found to prevent people failing in treatment due to illnesses other than COVID. Over half our patients suffered from non-communicable diseases such as hypertension or diabetes, and 16 percent were HIV positive, with a number having advanced HIV,” she said.

Oxygen is the main “essential medicine” for treating COVID-19, according to Jonker, but it is a resource in short supply.

“Forty per cent of the patients admitted to the field hospital have required oxygen in some form, and since each person can use up to 28,000 litres of oxygen a day, innovative solutions needed to be found to ensure its ongoing provision,” she said.

Large oxygen tanks are the ideal solution, as these can support high flow nasal oxygen and provide uninterrupted supply that isn’t dependent on electricity or frequent cylinder delivery, but the speed at which the COVID-19 epidemic moves means that installing a tank may take too long, leaving the option of smaller compressed oxygen cylinders, or portable oxygen concentrators, if these can be sourced.

“If you have access to electricity then oxygen concentrators are the better short-term solution, as the cylinders are expensive and a lot of work to manage to ensure that they don’t run out unnoticed, leaving patients without oxygen. In the midst of great supply chain disruption our supply team managed to source 60 oxygen concentrators – one for each bed in the hospital,” Jonker said.

Normal arterial blood oxygen saturation levels in humans are between 95 and 100 per cent. To achieve a saturation level of at least 92 per cent, MSF medical staff in Khayelitsha start patients on nasal prongs or a 40 per cent face mask connected to a single 10-litre oxygen concentrator. If this approach does not work, the 40 per cent mask is exchanged for a re-breather mask. However, 15 litres of oxygen flow is required to fill the bag of a re-breather mask, exceeding the capability of a single concentrator.

“To generate that additional flow, we learned that by using a plastic Y-connector you can connect two oxygen sources together to provide what is known as double oxygen For example, by setting two oxygen concentrators to nine litres of flow, you get enough flow to fill your re-breather mask,” Jonker said.

If the saturation level remains below 92 per cent, MSF staff additionally connect a nasal cannula to a cylinder of compressed oxygen at six litres flow, placing the two prongs in the nostrils underneath the face mask.

“Another simple thing we do to improve oxygenation is the physiotherapy technique known as proning. By having a patient lie on their stomach, propped on pillows, you can improve the oxygen saturation percentage by an additional 10 per cent.

For example saturation can go from 80 per cent on a face mask up to 90 per cent, removing the need for additional oxygen sources or increasing the saturation for those who cannot achieve normal levels on double oxygen. If we can get patients to do this on their own, frequently, we could also use less oxygen – a vital saving if you’re working in a low-resource setting,” she said.

Bring the community with you

Of the three COVID-19 overflow facilities developed in the Cape Metro area, the MSF-run field hospital in Khayelitsha was the only one that served a specific community.

“This was a big plus,” said Jonker, “as it made patient movement easier, and support from the district hospital more efficient.”

Many patients said they appreciated being treated nearer to family, and home.

“You cannot see your family, because of the danger of spreading this virus, but at least they are near and can bring food, and nurses are with you in the ward all the time,” said Esther Sithole, 71, a former field hospital patient.

Stigma is a very real threat. In March, the first patient confirmed as COVID-19 positive in Khayelitsha had to leave home after being threatened. In KwaZulu-Natal, in late July, a COVID-19 facility was destroyed by arsonists.

After 20 years of responding to the HIV and TB epidemics in Khayelitsha, and Eshowe in KwaZulu-Natal, MSF has learned the importance of clear communication with communities.

“Before opening the field hospital we reached out to the community leaders and secured their support and help to identify potential challenges we hadn’t anticipated. We spent weeks educating people on COVID-19 in malls, taxi ranks and clinics, and provided cloth masks and handwashing kits to help people implement the advice we were giving them,” said Mpumi Zokufa, MSF health promotion manager in Khayelitsha.

For Zokufa and her MSF colleagues, the COVID-19 frontline is not located in the hospitals, clinics and field hospitals, but in the streets and people's homes.

MSF is currently involved in responding to the COVID-19 in five South African provinces. In the Western Cape, MSF works with the Western Cape Department of Health and City of Cape Town Health, running a field hospital in Khayelitsha and conducting extensive health promotion activities in communities.

As COVID-19 surges in the Eastern Cape, MSF has sent a team to support the development of a COVID-19 overflow ward for Butterworth Hospital, which serves the rural Mnquma population of 286 000, sharing lessons learned in the course of developing the Intermediate Care Facility and managing patients in Khayelitsha. On 31 July, a truck carrying medical equipment from the Khayelitsha field hospital, available due to declining demand for beds in the Western Cape, arrived at Butterworth Hospital.

In KwaZulu-Natal, which currently has the highest rate of COVID-19 transmission in the country, MSF is supporting two hospitals – one in the town of Eshowe, the other in rural Mbongolwane – to cope with the COVID-19 peak. The project has also helped health authorities to establish 35 community pick-up-points for chronic medications, with a view to shielding vulnerable populations from COVID-19 infection.

The North West province is yet to experience a surge in cases, but the MSF team in Rustenburg has participated in COVID-19 activities, primarily in the provincial hospital but increasingly at the health centre level.

Gauteng MSF teams have worked in Tshwane and Johannesburg, offering COVID-19 screening and contact tracing, as well as general healthcare consultations at several shelters for the homeless. Community-based health promotion among vulnerable groups, including migrants and asylum seekers are ongoing, as is extensive health promotion training for community-based organisations.

Download logo
The 60-bed Khayelitsha Field Hospital was developed by MSF to support the nearby Khayelitsha District Hospital in coping with the pressures of peak COVID-19 transmission in the Western Cape. South Africa, June 2020. © MSF/ROWAN PYBUS