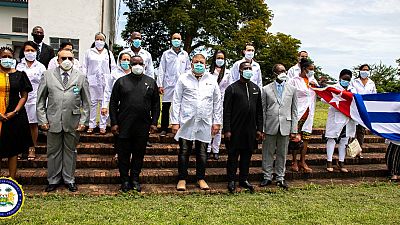 Sixteen Cuban Medical Doctors and Nurses, who are in Sierra Leone to help the country’s response to the Coronavirus pandemic, COVID-19, have today met His Excellency President Dr Julius Maada Bio at State House.

Presenting the team to the President, Minister of Health and Sanitation, Professor Alpha Tejan Wurie, said that the move was a clear manifestation of the cordial relationship that existed between the people and governments of Sierra Leone and Cuba, adding that it was also reflective of the clear bonding and cooperation between ministries in the New Direction government.

Head of the Cuban Medical Brigade, Bernardo Quintero, thanked the President and people of Sierra Leone for receiving them into the country. He said that they were a group of specialists working with the Sierra Leonean medical team to achieve the government’s objective of fighting the COVID-19.

On his part, President Bio thanked the Government and people of the Republic of Cuba for answering to the call of the Government of Sierra Leone by providing 16 medical personnel to support the country in the fight against the COVID-19. He said that the support provided by Cuba clearly demonstrated their commitment in solidifying the long-standing bilateral relations between the two countries.

He also assured of government’s commitment to the common objective of both countries, which included the principles towards building a just, peaceful and stable world through cooperation and coordination on both bilateral and multilateral fronts.

“The Government and the people of Sierra Leone further appreciate the Government of the Republic of Cuba’s support in the medical sector in the country, by continuously awarding scholarships, over the years, to students to train in the various medical fields. This has greatly contributed in boosting the healthcare system in the country,” he said.