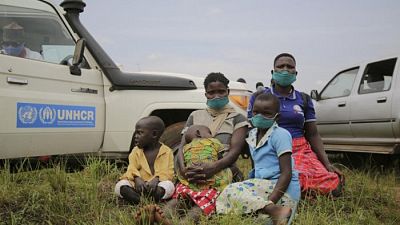 UNHCR, the UN Refugee Agency, welcomes the decision by the Government of Uganda to give safe haven to thousands of refugees fleeing escalating violence in the eastern Democratic Republic of the Congo (DRC). They have been stranded in a remote, inaccessible area in Mahagi Territory since late May.

The new arrivals were previously part of a larger group of approximately 45,000 people, according to local DRC authorities, who had attempted to flee towards the Ugandan border with the DRC shortly after deadly militia attacks on civilians in Ituri province on 17 and 18 May. While some have been able to return to their area of origin, thousands remained close to the border.

Some 1,500 asylum seekers entered Uganda today through Guladjo and Mount Zeu crossing points in Zombo district. New arrivals were hungry and tired. Many also arrived in a frail state having been in a precarious situation, hiding in the bush for the past several weeks without sufficient access to food, clean drinking water and shelter. Most are women and children, as well many elderly people.

“My gratitude goes to the Ugandan Government and the local communities for this great show of solidarity with people fleeing conflict,” said Joel Boutroue, UNHCR Representative in Uganda. “It proves that even in the midst of a global crisis like COVID-19, there are ways to manage border restrictions in a manner which respects international human rights and refugee protection standards.”

Uganda implemented restrictions on border travel in March to contain the spread of COVID-19, halting admission of new asylum seekers into the country. On humanitarian grounds, the President of Uganda directed its government to temporarily re-open the Zombo border to allow life-saving aid and protection to be provided to the group of refugees. The Government has indicated that border controls are set to be reintroduced on Friday, once the humanitarian operation is complete.

UNHCR and partners, in coordination with the Office of the Prime Minister (OPM), Ministry of Health and the district local government, have been working around the clock in Zombo to strengthen reception capacities at the border, including quarantine facilities, and ensure adequate levels of emergency assistance are available.

All new arrivals will undergo security and health screening at the border. Vulnerable individuals will be identified and fast tracked for assistance.

The group will initially be quarantined at Zewdu Farm Institute near the border crossing, which can accommodate some 6,000 people now. UNHCR and partners have installed tents, health screening areas, toilets, hand-washing facilities, and water tanks.

Following the mandatory quarantine period of 14 days, in line with national guidelines and protocols, asylum seekers will be transported to existing refugee settlements.

The refugee response in Uganda is facing multiple challenges due to underfunding, including severe food ration cuts. With 870 COVID-19 cases in Uganda, including 52 refugees, UNHCR has been working with the government and partners to construct and strengthen quarantine and isolation facilities and increase handwashing supplies and availability of masks as part of the response plan. Many of our transit and reception facilities across the country have been converted into quarantine centers for the district, where we provide additional support for hundreds of Ugandans and refugees on a daily basis.

“The needs are huge and growing,” said Boutroue. “Time is of the essence. If US$28 million is not made available immediately, we are faced with the risk of having to stop critical services providing non-COVID19 related health care, child protection and mental health support.”

UNHCR has received just 18 per cent of the US$357 million required for its operation in Uganda. UNHCR appeals for international solidarity to help Uganda uphold its commitments towards the Global Compact on Refugees and maintain its progressive refugee policy during these difficult times.

Download logo
A group of newly arrived refugees sit exhausted in Zombo, a Ugandan village close to the border with the Democratic Republic of the Congo. © UNHCR/Rocco Nuri