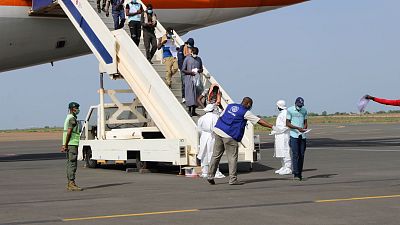 On Tuesday (23/06), 159 Malians returned home on a charter flight thanks to a humanitarian corridor opened by the governments of Niger and Mali. The cohort had been waiting in transit centres in Niamey, Niger’s capital, since March owing to the border closures decreed by governments to prevent the spread of COVID-19.

This is this month’s second charter organized by the International Organization for Migration (IOM) through European Union funding this month. On 4 June, 179 Malians returned.

As COVID-19 shattered the hopes for an imminent return of thousands of migrants in transit across West and Central Africa, IOM has been negotiating with host governments and governments of origin the opening of humanitarian corridors to allow for the voluntary return of migrants waiting in overcrowded transit centres after a perilous journey towards North Africa.

“This humanitarian corridor ends the frustration of many Malians who have been waiting for more than three months for some in centres and for families who had lost hope of seeing their husbands, sons, fathers and relatives again,” said Pascal Reyntjens, Chief of Mission of IOM in Mali.

“Just a few days left,” Abdoulaye kept repeating to IOM staff while waiting for three months in a transit centre run by IOM in Niger, before boarding his homeward flight.

Upon their arrival, all migrants were subject to the national COVID-19 prevention protocol, including the disinfection of their luggage, the provision of masks and hydro-alcoholic gel, health screenings and COVID-19 tests. Upon arrival in Bamako, Mali’s capital, they started a 14-day quarantine in a transit centre run by IOM’s partner before they reach their community of origin.

“During this COVID-19 period, the most fragile and vulnerable populations are stranded migrants in the sub-region,” said the Representative of the Ambassador of the EU Delegation in Mali, Mustapha Zlaf. “Through the voluntary return of migrants, the European Union, in collaboration with IOM, is supporting the government of Mali to protect and assist their most vulnerable citizens,” he added.

“I am happy to return to my country. I suffered a lot during my trip. I was rescued in the desert by IOM’s team. I still have friends stranded in Niger. I hope they will safely return to Mali soon,” said Boubacar, one of the returnees, who had left Mali in 2019 to go to Algeria in search of better opportunities.

In the coming weeks, the returning migrants will receive reintegration assistance based on their needs. They will benefit from psychosocial, social and economic support to rebuild their lives at home.

This return was made possible thanks to the European Union funding through the EU-IOM Joint Initiative for Migrant Protection and Reintegration.

Download logo
Malians returning home on a charter flight thanks to a humanitarian corridor opened by the governments of Niger and Mali (Photo: Moussa Tall/IOM Mali)