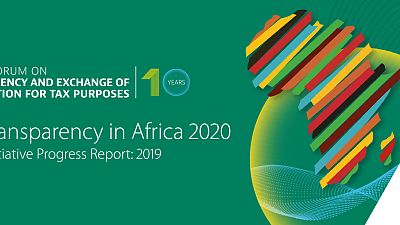 Tax Transparency in Africa 2020 – produced by the Global Forum for Transparency and Exchange of Information for Tax Purposes, the African Union and African Tax Administration Forum (ATAF), in close partnership with the African Development Bank – noted the need for African countries to engage further in revenue mobilization, a concern sharpened by the backdrop of the ongoing global novel coronavirus pandemic. The report was published during a virtual launch.

“This annual publication of the Tax Transparency in Africa is part of the various efforts of the continent to advance global tax transparency and exchange of information agenda in Africa in order to combat corruption, tax evasion, money laundering, fraud, base erosion, and profit shifting and illicit enrichment,” said Victor Harrison, African Union Commission Commissioner for Economic Affairs, in the report’s preface.

Illicit financial flows in Africa are estimated at between $50 billion and $80 billion annually; 44% of Africa’s financial wealth is thought be held offshore, which corresponds to tax revenue losses of €17 billion.

Mr. Coulibaly said, “The African Development Bank firmly believes that collaborations with both regional and international partners are key to moving forward the agenda on tax transparency which has significant impact on domestic resource mobilization, the achievement of the SDGs and other regional aspirations including the African Union’s Agenda 2063 and the Bank’s own High Fives.”

He also underscored that the ongoing COVID-19 pandemic recalls the critical importance of domestic resource mobilization in Africa, in particular in relation to tax transparency and the fight against illicit flows, in order to further protect populations against threats to their livelihoods.

The Africa Initiative, which launched in 2014, is a partnership of the Global Forum, its African members and regional and international organizations, including the African Development Bank, ATAF, and The World Bank. The Global Forum has a self-standing dedicated secretariat based in the OECD’s Centre for Tax Policy and Administration.

The African Development Bank, an observer to the Global Forum since 2014, also participates in the Africa Initiative. The Bank promotes African tax transparency through support to institutions and non-state actors in its regional member countries and by strengthening international co-operation to eliminate IFFs.