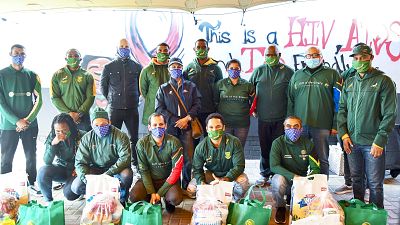 Springbok captain Siya Kolisi and fellow Rugby World Cup winners Damian Willemse and Herschel Jantjies caused much excitement as they delivered food parcels and a message of hope to a group of Peakview High School learners in Athlone on the outskirts of Cape Town on Thursday.

The trio of Springbok RWC winners – who were accompanied by Blitzbok and Imbokodo captains, Siviwe Soyizwapi and Zintle Mpupha, and representatives of the charity organisation Gift of the Givers – also laid down a challenge to schools across the country to get involved with the campaign.

The school that sells the most tickets in the raffle as part of the campaign, will win a “visit” by the Webb Ellis Cup, while 44 unique prizes are also up for grabs.

The gathering at the Cape Flats school was to raise awareness for SA Rugby’s #StrongerTogether for R32-12 relief campaign, whereby the Springboks are assisting with hunger alleviation through a unique project.

The other charity who will benefit from the campaign – where raffle tickets are sold for R32-12 and the players are giving away some of their most prized possessions from last year’s Rugby World Cup in Japan – is Food Forward SA.

Kolisi and the players received a roaring welcome at the school, where only the Grade 12 learners are back as a result of the COVID-19 pandemic lockdown regulations.

The Bok skipper and his fellow national teams players handed over food parcels and school stationary to the 67 matriculant learners, while their proud teachers were watching the event in the schoolground.

Willemse and Jantjies were the two youngest members of the 2019 RWC-winning squad and both players said they were excited to be part of the proceedings and happy to be part of the fundraising campaign. Kolisi shared a few words of inspiration with the learners before the handover of the food parcels.

“I am always excited to visit a school, and even more so do it during this challenging time,” said Kolisi, who is giving away a match jersey worn in one of the RWC pool matches last year.

“We know that your very important school year was severely disrupted by the coronavirus and that your communities are suffering because of the negative impact. However, it is important that you show determination to finish your academic year and I want to urge you to work so much harder and just give it your best.

“Our RWC win of last year was the result of a lot of hard work, team work and effort, so you must approach your studies and exams with just as much determination. You are the leaders of tomorrow and even though it is tough at the moment, persevere and do your best to prepare as much as you can for your exams.”

Jantjies said it felt good to give back some of their time to the learners and the community and urged public who haven’t yet bough their raffle tickets, to do so before the end of the campaign early next week.

“I think it is an amazing campaign and I am really honoured to play my part of the Springboks’ initiative,” said Jantjies, whose prize includes a RWC match jersey and “Champions” cap.

“The players all jumped onboard and donated personal items used during the RWC, which is really something special. We want to thank those who have contributed so generously, but we still have a few days to go with some wonderful prizes on offer.”

Willemse, who has donated a Springbok RWC t-shirt and match shorts, said: “The #StrongerTogether for R32-12 campaign is nearing its end and we would like to encourage people to visit https://www.Springboks.Rugby/, buy a raffle ticket for only R32-12 to win one of those amazing prizes up for grabs.

“This unique campaign works closely with Food Forward SA and Gift of the Givers, and they are making a huge difference in the lives of ordinary South Africans all over the country, with a helping hand where possible.”

Other prizes announced so far include Cheslin Kolbe’s scrum cap, Faf de Klerk’s SA flag-print underwear, Rassie Erasmus’s lucky white shirt and a talk to raise funds for the winner’s charity of choice, a personalized RWC Trophy Tour to the house of one lucky winner and Duane Vermeulen’s RWC training jersey – items that can’t be bought.

Gilbert, official ball supplier to RWC 2019 and SA Rugby, has also come to the party and added a limited-edition replica Cup final ball for every winner, commemorating last year’s final.

And ASICS, official apparel sponsor of the Springboks and SA Rugby, have thrown into the prize pool commemorative World Cup GEL-LYTE III sneakers and a new Springbok jersey.

The campaign has been built around the score in the Rugby World Cup final in November, in which the Springboks defeated England, 32-12. To find out more on the campaign, click here (https://bit.ly/2AE6y3V), or you can head straight to Computicket to buy (https://bit.ly/2UXgcp5).

Note to Editors:
A rights free image of the SA Rugby group and representatives of Gift of the Givers is attached – please credit Ashley Vlotman/Gallo Images. 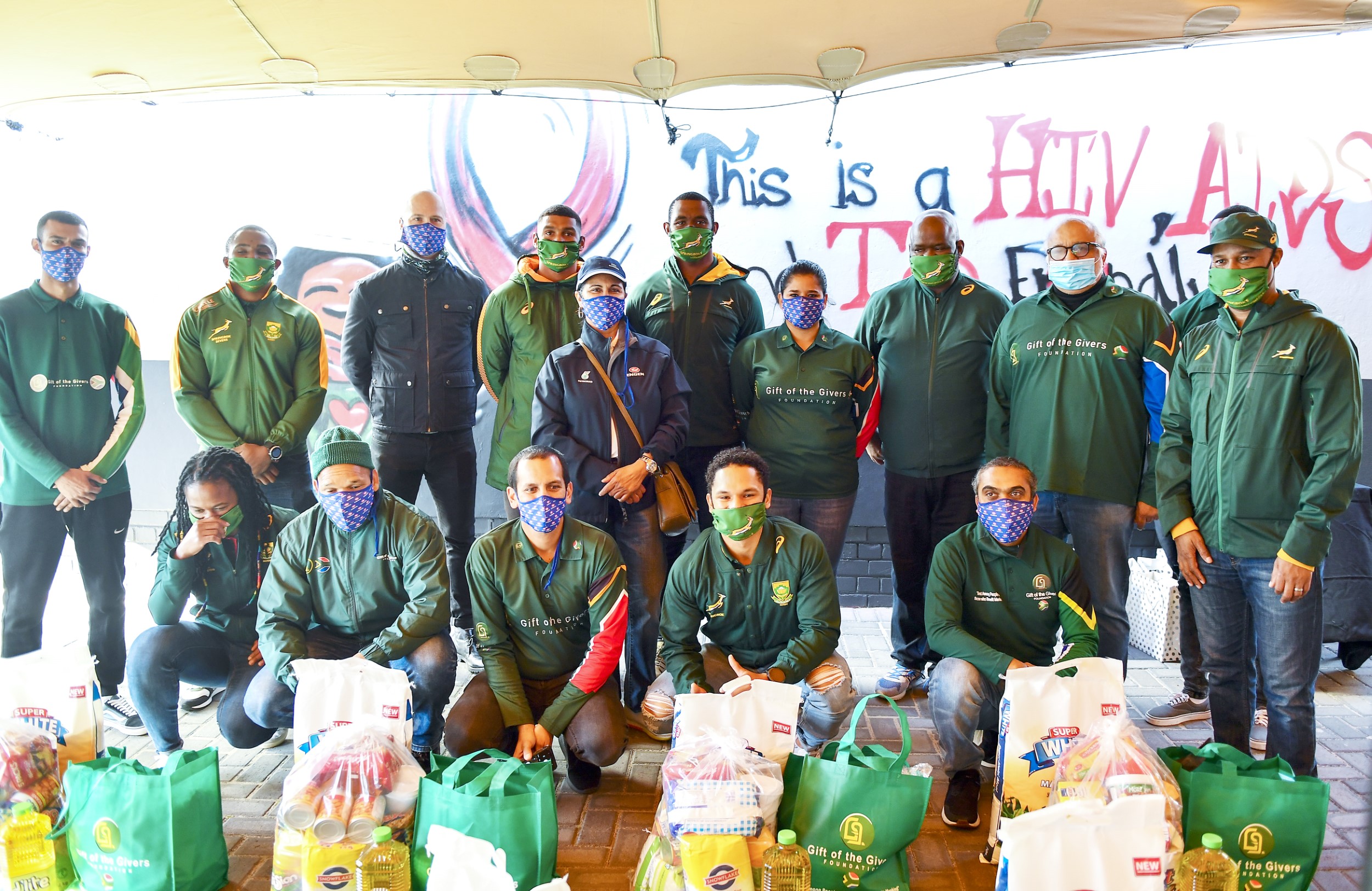