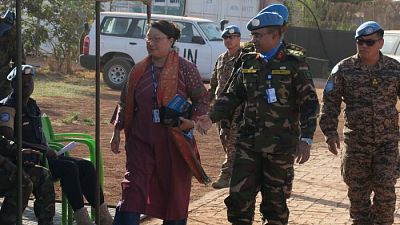 “In all the years that I have spent working across conflict zones with United Nations Peacekeeping, I’ve discovered that women, genuinely, hold the key to sustainable peace. We constitute 50 per cent of any society and only by involving women in key decisions that impact their day-to-day life will societies become truly peaceful and inclusive, says Hiroko Hirahara, Head of Field Office, UNMISS Bentiu.

Prior to South Sudan, Ms. Hirahara has served in peace operations in Cyprus, Darfur and Liberia. Currently she is leading uniformed and civilian peacekeepers at a challenging time. “With the dangers posed by COVID-19, we have had to completely change the way we work on-the-ground as we support national-led efforts to mitigate the spread of the virus in Bentiu while doing our best to fulfil our mandated tasks despite severe operational challenges,” she reveals. “However, I’m very proud to say that we’ve managed to find innovative ways to keep ourselves and the communities we serve safe and healthy as far as possible.

Ms. Hirahara says that the number of female peacekeepers—military, police and civilian—being deployed to UNMISS and peacekeeping missions worldwide is gradually increasing. “While we as the UN still have a long way to go in terms of achieving gender parity in peacekeeping operations, such an increase, in my opinion, makes a very positive impact, especially when it comes to dealing with sexual- and gender-based violence,” states Ms. Hirahara. “I’ve noticed that survivors of such incidents instinctively and culturally find it easier to open up to female peacekeepers and ask for the help they need. What’s more, uniformed female peacekeepers in Bentiu have encouraged South Sudanese women to take leadership roles and done a lot to build capacity among their South Sudanese counterparts,” she continues.

A stellar example of such capacity building is Lieutenant-Colonel Emilie Simon, a Military Observer from Namibia, who has built strong networks with her national military counterparts. “Many of the South Sudanese female military personnel I interact with are frustrated by the lack of career development. With time, I’ve managed to motivate many of them to further their education as well as sharpen their skills. It is a matter of pride for me when my South Sudanese interlocuters say that I’m a role model for them,” avers Lt. Colonel Simon.

Lance Corporal Anabella Gloria Nbou from Ghana has a similar story to tell. “I’m currently deployed in Koch and by virtue of constantly patrolling in remote villages here, I’ve seen firsthand the devastating impact of the conflict on women and children. Therefore, I make it a point to be accessible to local women and give them the space to tell me their stories,” she says.

Ruth Njiru from Kenya, a Police Adviser serving with the UNMISS Bentiu Field Office since December 2018 says that the opportunity to interact very closely with local communities, especially women and children, has been invaluable. Ms. Njiru has used her time on patrols to develop connections with young people, share messages and raise awareness among youth about the importance of education. “As women peacekeepers, we strike a different rapport with South Sudanese women, as we share many of the same concerns. I’ve always used this connection to make sure we do the best we can to trickle down income-generating skills to displaced women as well as local law enforcement counterparts,” she says.

With COVID-19 casting a pall over the entire world, these women peacekeepers from Bentiu are truly inspirational continue to make their best efforts on behalf of UNMISS to fulfil mandated tasks, while following all safety precautions advised by the World Health Organization. They are unanimous in their opinion that peacekeeping, despite all its challenges, is an incredibly rewarding experience!