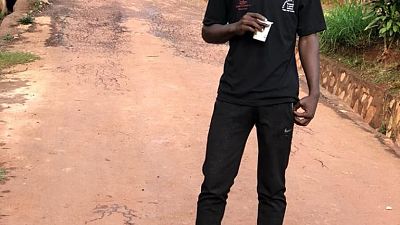 Hillary Nuwamanya, 24, was born HIV-positive, and has chosen to live his life setting an example for other young people who are struggling to find hope.

As an important part of the World Council of Churches Ecumenical HIV and AIDS Initiatives and Advocacy programme, the Ugandan has trained people in how to lead their communities in gender equality, gender justice and zero tolerance for sexual and gender-based violence. He often participates in or facilitates intergenerational workshops on HIV and gender justice.

On Thursdays, you’ll find Nuwamanya wearing black in support of Thursdays in Black, the global campaign for a world free from rape and violence. The people around him describe him as “an agent of change.”

He often volunteers with different non-governmental organizations to advocate for the rights of young people living with and affected by HIV and other diseases to live in a society of zero stigma and zero discrimination. Currently, he is supporting people living with HIV with treatment adherence in this period of COVID-19 by picking and delivering their medicines to their homes, using a borrowed bicycle to travel many kilometres so that he can reach out to them.

His motivation to help others in treatment adherence comes from his own experience: “I once got tired of taking my ARVs (anti-retrovirals). I had to ask my doctors for a ‘drug holiday’ for six months because I felt like I was not meant to take these tablets. It caused negative effects towards my life that resulted to AIDS.”

Since then he has chosen to keep on with his ARVs. “I wouldn't want to see any other person go through the same kind of life that I lived,” he said. “I choose to help out because I have the means to save lives of people that are affected by circumstances, saving their lives means a lot to me and my God.”

Lately, his schedule includes many kilometres on the delivery bicycle. “Harsh climate, rude road users that keep on oppressing other people that use bicycles on the road, insufficient protective measures such as face masks and sanitizer are among the many challenges I have to endure,” he said.

Nuwamanya is among the millions of unemployed youth in Africa. He uses his little savings and help from friends to carry out his lifesaving mission. He holds a 2016 certificate in Computer Science and Technology from Namasuba College of Commerce and a 2018 diploma in Hotel Management and Catering from the same college.

“A candle loses nothing by lighting another candle,” Nuwamanya said. “Every step one takes to help out another person is a significant impact in that other person's life. Small contributions also mean a lot to other people, it is never too late to raise a hand for another.”