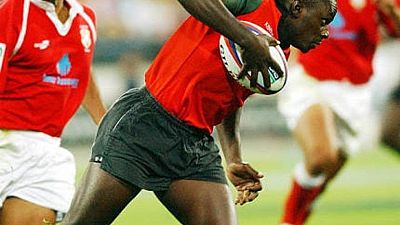 It is with deep sorrow that we have learnt of the passing of Allan Makaka following a traffic accident on Saturday 23 May 2020.

Born on 28 June 1982, Allan was a former Kenya Sevens international and was part of the squad that played at the 2005 Rugby World Cup Sevens in Hong Kong and the 2006 Commonwealth Games in Melbourne, Australia.

He made a total of 57 appearances on the Sevens World Series,managing 28 tries and is ranked 21st overall amongst Kenya's all time try scorers on the World Series.

An alumnus of Mumias Boys Primary School,Musingu High School and the United States International University- Africa, he initially played his club rugby at defunct military side Ulinzi, winning back to back National Sevens Circuit titles in 2002 and 2003, making a name for himself with his searing pace and earning selection to the national sevens squad, Shujaa off the back of his performances.

Indeed, Fijian sevens legend Waisale Serevi once described Makaka as one of the fastest players he ever saw.

He moved to Kenya Harlequin upon Ulinzi's disbandment at the close of the 2004 season and featured in the Quins squads that won the National Sevens Circuit title in 2005 and 2006 and the 2008 Kenya Cup league title.

A warm individual off the pitch, Allan's death is indeed a huge loss to his family, friends, colleagues and the rugby fraternity.

May God grant his family, friends, team mates and colleagues strength during this trying time.