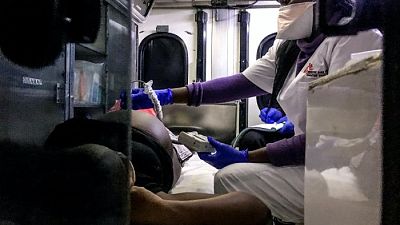 For the over half a million people living in Mathare, one of Kenya’s largest slums, the arrival of the COVID-19 outbreak in the country may present an even bigger risk than being infected with the virus. The disruption of the local health care infrastructure caused by the outbreak has badly affected their ability to find essential medical care, leaving many at risk of being deprived of life-saving services.

This adds to the precarious conditions in which most people in the area are forced to live, often sharing crammed spaces with limited access to clean water, which makes COVID-19 preventive measures impossible to adopt. The result is a situation with potential for dramatic consequences, as the need for medical assistance increases while its availability is significantly reduced, as witnessed by Médecins Sans Frontières (MSF) teams, who work to provide emergency care and assist victims of sexual and gender-based violence.

“Many private health facilities closed because of the risk of contamination and the lack of personal protective equipment (PPE) and at least one public health centre has been closed and its staff quarantined after some of them tested positive” says Dr. Hajir Elyas, Project Coordinator for MSF in Mathare. “Some hospitals are refusing to admit patients with respiratory issues even when coronavirus has been ruled out.”

“As a consequence, many cases of TB, asthma and pneumonia end up in COVID-19 isolation facilities, resulting in delayed care and increased exposure to these patients and their families.”

As of 14 May, there have so far been 758 cases of COVID-19 and 42 deaths in Kenya. As in many other countries, MSF has been striving to adapt our programmes to maintain the continuity of our medical care in Mathare. Our teams have so far managed to keep the activities running, including much-needed lifesaving emergency services.

In April, both the number of ambulance calls (551) and of people presenting to the emergency room (more than 2,300) reached their peak since the beginning of the year. The range of our activities has expanded to fill part of the void left by the impact of the outbreak: between March and April for example, the number of obstetric patients calling the ambulance more than doubled (from 98 to 209), as pregnant women struggle to find means of transport at night.

“The challenge for pregnant women is that no taxis or public service vehicles are operating after curfew, not even the boda boda (motorcycle taxis) that people use in informal settlements,” explains George Wambugu, Medical Activities Manager. “This leaves mothers exposed to obstetric complications.”

“We’ve had mothers deliver in our ambulances or in the trauma room,” Wambugu says. “We recently had a mother deliver a pre-term baby in our ambulance in need of resuscitation. Luckily, the baby survived, and both recovered well.”

Victims of sexual violence in the area are facing a particularly difficult situation. With almost no options for transportation and a volatile situation during the night, the number of people coming to ‘Lavender House’, the MSF centre dedicated to care for sexual and gender-based violence, has decreased, even if there are indications that the number of incidents has most likely increased.

“We know the number of cases is on the rise”, says Dr Elyas. “We received calls from women or youngsters trapped with their abusers, with no way to leave and access care.”

MSF teams too, however, crucially rely on the availability of PPE to protect patients and staff from the risk of infection. The global shortage of protective material may force even MSF to shut down our programmes – including emergency, lifesaving activities – if a reliable source of PPE is not rapidly found. This happens at the worst possible time. While the number of reported COVID-19 cases has remained relatively low so far, it is expected to increase, and so risks doing the number of indirect victims – those who couldn’t access essential medical care for other types of medical issues.

With the rainy season approaching, the seasonal increase in respiratory disease is expected to make the situation even more challenging.

“People with respiratory symptoms, particularly children, may be labelled as suspected COVID-19 cases and referred to the wrong hospital, resulting in late or inappropriate care” says Dr Elyas. “As a consequence, we can expect some reluctance by parents to bring the children to health facilities – even more problems.”

Download logo
Rosemary Koech, an MSF Emergency Medical Technician (EMT) conducts an ultrasound test to an expectant mother in active labour in Mathare North. She went into active labour shortly after 10:00 pm amid a dusk-to-dawn curfew. They called MSF and she was referred to Pumwani Hospital. © MSF