Coronavirus - Democratic Republic of the Congo: Child vaccinations down in DR Congo, and COVID-19 is not helping: UNICEF 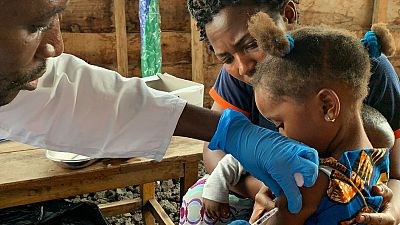 Fewer children are getting vaccinated in the Democratic Republic of the Congo (DRC) and the COVID-19 pandemic is almost certainly going to make matters worse, the United Nations Children’s Fund (UNICEF) says. If the trend continues, it could trigger a resurgence in deadly childhood diseases such as polio, chickenpox, measles, yellow fever, hepatitis B, diphtheria, tetanus, whooping cough and meningitis.

In a statement released on Friday, UNICEF said that a decline in vaccinations in January and February, compared to the same two months in 2019, was likely due to such established challenges as low coverage, insufficient supplies and a poor system for keeping vaccines cool whilst in storage and transit.

COVID-19 will “almost certainly worsen the situation,” with parents reluctant to turn up at vaccination sessions for fear of exposing themselves and their youngsters to the novel coronavirus, and health workers lacking personal protective equipment, the agency added.

In response, UNICEF is urging the Government of the Democratic Republic of the Congo to launch catch-up campaigns and intensify immunization efforts to reach all children with life-saving vaccines.  It also called on international donors to step up their multi-year contributions to the effort.

“If this downward trend in immunization coverage persists, it will erase the gains made over the past two years in tackling deadly vaccine-preventable diseases such as measles”, warned Edouard Beigbeder, UNICEF’s representative in the Democratic Republic of the Congo.

“The larger the number of unvaccinated or under-vaccinated children, the higher the risk of disease outbreaks – and this will only strain an already overburdened health system”, Mr. Beigbeder said.

The challenge is not unique to the Democratic Republic of the Congo. On 1 May, UNICEF said that children’s lives are at stake as COVID-19 restrictions hamper the delivery of vaccines that are already in short supply.

In the first two months of this year in the Democratic Republic of the Congo, coverage of vaccinations against early childhood diseases – including hepatitis B, diphtheria, tetanus, whooping cough and meningitis – went down by 8 to 10 per cent, UNICEF said on Friday.

Polio vaccination coverage slipped by 8.4 per cent for the inactivated poliovirus vaccine (IPV) and 5.4 per cent for the oral vaccine for type 3 polio. Coverage of other vaccines against chickenpox, measles, pneumococcal disease and rotavirus decreased by between 4.5 and 1.5 per cent.

Turning percentages to numbers, UNICEF said that 86,905 children in the Democratic Republic of the Congo have not received the oral polio vaccine and 74,860 did not get a dose of the tetanus-diphtheria-whooping cough-hepatitis B-Hib3 vaccine.

In a country where only 35 per cent of children are fully vaccinated before their first birthday, the stakes are high, UNICEF said, warning that the Democratic Republic of the Congo risks losing its polio-free certification and that measles and yellow fever could return to epidemic levels.

Such an outcome could have a devastating impact on vulnerable children in areas affected by conflict and insecurity, or who live in remote parts of the country, it emphasized.