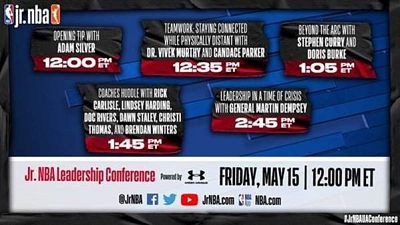 WHAT: The NBA’s fourth annual Jr. NBA Leadership Conference (https://on.nba.com/2Z7NJQu) powered by Under Armour will bring together members of the youth basketball community – including coaches, program administrators, partners, players and parents across the world – for discussions with the game’s leaders and public health experts about the current state of youth sports.

Hosted by ESPN analyst Jay Bilas, the free, virtual conference will be livestreamed on the NBA App, NBA.com and Jr. NBA.com and across the NBA and Jr. NBA’s Facebook, Twitter and YouTube accounts beginning at 6:00 p.m. CAT and feature an exciting lineup of panels and speakers, including:

The event will conclude with a 15-minute virtual, live basketball clinic with Chicago Bulls center Wendell Carter Jr. demonstrating drills that youth can complete at home and in limited space to develop their game in a safe and healthy way.

WHERE: Livestreamed across the NBA and Jr. NBA’s Facebook (www.facebook.com/jrnba/), Twitter (https://twitter.com/jrnba?s=20) and YouTube (https://bit.ly/3dOQz0Q) accounts as well as on the NBA App, NBA.com, Jr.NBA.com. Click here (https://on.nba.com/2WX6×26) for the registration, schedule and more information about the Jr. NBA Leadership Conference powered, including details on how to register.