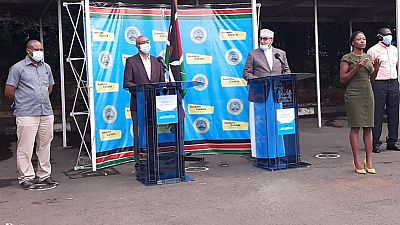 Kenya has registered the highest number of people who have recovered from the Coronavirus.

The Ministry of Health, Chief Administrative Secretary (CAS), Dr. Rashid Aman announced today that 32 people have been discharged from hospital rising the total number of recoveries to 239.

“These recoveries indicate that it is possible to overcome this disease with proper management,” he said and added that these number of patients discharged could not have been possible without the dedication and commitment of healthcare workers, some of whom he said work under very difficult condition.

The CAS also reported that in the last 24 hours, the government has tested 1,056 samples collected from individuals in quarantine facilities and from the surveillance program and 23 have tested positive for Covid-19 disease.

Twenty-two of the cases he noted are Kenyans, while one is Burundian and this now brings the cumulative number of those who have tested positive in the country to 672. Thirteen of the cases are males, while ten are females and the youngest is one year and nine months while the oldest is 80 years.

According to Dr. Aman, 12 cases are from Mombasa, 6 from Mandera, 4 from Nairobi, and one is from Kajiado. In Nairobi, 2 cases are from Umoja and one each from Komarock and Pipeline while the 12 cases in Mombasa are from Kisauni, Likoni has two and Mvita 8 cases. Mandera has 6 cases from Mandera East 3, and one case each from Elwak, Mandera North and Mandera West. Kajiado has only one case from Saina Estate.

However, the CAS also confirmed that the country lost two patients in Mombasa bringing the total number of those who have succumbed to the disease to 32. So far the overall number of samples that have been tested in the country stands at 32,097.

The Tourism and Wildlife Cabinet Secretary, Najib Balala who was also present disclosed that his ministry will hold a stakeholders meeting to discuss protocols in the hospitality industry tomorrow, inline with the government and the Ministry of Health recommendations. “The Ministry of Health will have the last say on the guidelines that will be discussed in the meeting,” he stated.

“We will be meeting with all the stakeholders both in hotel and restaurant businesses to look at the protocols and practices. We are starting with the hospitality sector and then move to other sectors as the government is committed to gradually and slowly open the economy,” he said.

Dr. Francis Kuria, Head of Public Health also re-emphasized that the Ministry will not hesitate to close premises especially the hotels and eateries that have not adhered to the laid down guidelines given for reopening up their businesses.

“Starting tomorrow we will be sweeping various premises in the area and if one is caught without the new permits as required, we will close the premises and they should know they are also liable to prosecution,” he said.

Dr. Kuria also explained that the Government has put up designated areas along the transport chain for track drivers who are traveling to border countries where they will be tested and also checked to know if they have followed the guidelines they have been given.

“Before one travels, the track driver must have undergone testing 48 hours prior to travel and also gotten a certificate which they will have to present to designated areas as they travel,” he noted and added that there are designated areas along the transport chain where testing camps have been set up and also some hospitals to be availed at the MOH website.

Isiolo Governor Mohammed Kuti said considering that the number of cases are rising especially at County levels, County governments should be well prepared by setting aside more isolation and quarantine facilities.

Kuti added that floods at various counties have compounded the Covid 19 problem with most displaced communities camping in one area , emerging diarrhea and also malaria cases might emerge thus counties should be prepared while the National government should come in and support on this.

Distributed by APO Group on behalf of Ministry of Health, Kenya.
Media files