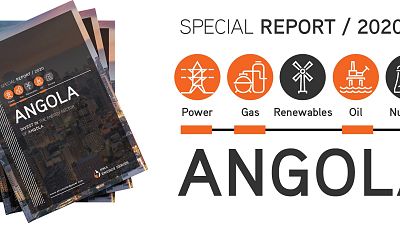 Africa Oil & Power launched its Africa Energy Series Special Report: Angola 2020 on Thursday; the available-for-download report provides the status of several investment projects in development in Angola, including its 2020 licensing round, construction of gas processing facilities in Soyo, and more; the publication follows the announcement of the new dates for the Angola Oil & Gas 2020 Conference & Exhibition, which will now take place in Talatona from October 14-15.

In line with Angola’s aim to drive capital inflows into its bankable oil and gas projects, Africa Oil & Power (AOP) (www.AfricaOilAndPower.com) has launched the Africa Energy Series Special Report: Angola 2020 as a resource for investors entering or expanding their presence in the country’s energy sector.

Available for free download on AOP’s website, the report provides a concise look at Angola’s investment opportunities still on track for development in the face of project delays caused by COVID-19.

“While COVID-19 continues to rattle our industry and stall energy developments across the continent, Angola boldly moves forward with a number of its large-scale, capital intensive projects, as explained in the Africa Energy Series Special Report: Angola 2020,” said AOP Acting CEO, James Chester. “While the current investment climate remains challenging for the oil and gas industry, sufficient and sustained FDI is required across the energy supply chain to not only survive the crisis in 2020, but also overcome it in 2021.”

The report primarily focuses on upstream developments in Angola, including the 2020 oil and gas licensing round which, as of May 6, is still scheduled to take place; recent block extensions granted to major operators, including ExxonMobil, Chevron, and Total; the increase in the appraisal of estimated recoverable resources of ENI’s Agogo discovery; the installation of the Lifua-A platform to support oil and gas exploration in Block 0; and the establishment of the New Gas Consortium that represents Angola’s first upstream natural gas partnership.

Within Angola’s developing downstream industry, the report provides updates on the planned construction of natural gas and hydropower plants across the country; the refurbishment of the Luanda refinery to quadruple its current production; and the tender for the construction of new refineries in Cabinda, Lobito, and Soyo.

The publication follows the recent announcement of a change in date to the Angola Oil & Gas 2020 Conference & Exhibition, which will now take place in Talatona from October 14-15. Under the theme “Angola: African Investment Capital 2020,” the conference returns for its second year to promote and attract FDI to the country’s bankable projects and sign up new entrants to Angola’s oil and gas sector.