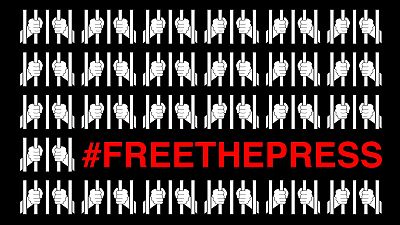 New York, May 5, 2020—In recognition of World Press Freedom Day, marked each year on May 3, the Committee to Protect Journalists today said 11,337 supporters from at least 105 countries, alongside 191 partner organizations, joined its global #FreeThePress campaign calling for the release of all jailed journalists. CPJ advanced the campaign in response to the coronavirus pandemic, which poses a grave threat to the health of imprisoned populations.

“Jailing journalists is the hallmark of an authoritarian regime, but keeping them in jail in the midst of a pandemic is sheer cruelty,” said CPJ Executive Director Joel Simon. “Journalists shouldn’t be locked up — they should be out reporting the news, informing the public and holding authorities to account. The free circulation of information and ideas is essential to fighting COVID-19, and journalists can’t do their job from behind bars.”

At least four journalists, in Ethiopia and Iran, have been released because of the COVID-19 pandemic.

CPJ also called on the U.N. and the European External Action Service to press for the release of jailed journalists. The campaign culminated with a letter to U.N. Secretary General Antonio Guterres calling for urgent action on behalf of all those still behind bars.

CPJ’s coronavirus response page includes news coverage of journalists being arrested, assaulted, or censored for their work on the virus, as well as Q&A interviews with reporters on the front line. CPJ Emergencies regularly updates its physical, digital, and psychosocial safety advice, which is available in almost 40 languages, and journalists and newsrooms can submit questions to CPJ’s safety experts.