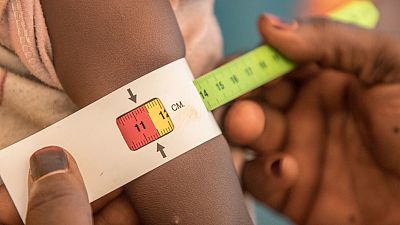 “We must sustain our assistance across the region”, Ms. Byrs said. “Especially in places such as Central Sahel, Central African Republic, Nigeria and Cameroon.”

An estimated 12 million children under five years old could be acutely malnourished in the lean season from June to August, up from 8.2 million in the same period last year.

The alert follows a similar warning from the UN agency about a potentially massive spike in global food insecurity in East Africa, as a direct result of the pandemic.

During the lean season in June and August, more than 21 million people across West Africa “will struggle to feed themselves”, she explained, adding Gambia and Benin to the list of countries in need.

“An additional 20 million people could struggle to feed themselves due to the socio-economic impact of COVID-19 in the next six months, doubling the number of food-insecure to 43 million in this region”, the WFP official added.

Highlighting people’s vulnerabilities, Babar Baloch from the UN High Commissioner for Refugees (UNHCR), described West and central Africa as “one of largest displacement situations in Africa…we are talking about 5.6 million internally displaced people, more than 1.3 million refugees and 1.6 million stateless.”

The UN refugee agency has repeatedly called for greater support for increasing numbers of people forced to flee for their lives amid renewed conflict in West Africa’s turbulent Sahel and Lake Chad region.

Burkina Faso has also witnessed massive displacement – of more than 838,000 people since January 2019 – a figure which keeps climbing with each passing day.

In recent weeks, the agency said that armed groups had targeted thousands of Malian refugees sheltering in camps near the border of Burkina Faso and Mali.

On Monday, the agency condemned attacks on 2 May on Malian refugees in Burkina Faso – “reportedly by the country’s security forces”, in Mentao refugee camp in which at least 32 people were injured.

The camp is located in Burkina Faso’s volatile Sahel region close to the border with Mali and hosts some 6,500 refugees, UNHCR said in a statement.

For WFP the priority continues to be the most vulnerable individuals.

They include “the urban poor – who live hand-to-mouth – (who) are most at risk”, Ms. Byrs said, highlighting how COVID-19 travel restrictions had compromised the transport of supplies and the functioning of open-air markets that serve most people, resulting in price increases in some countries.

Movement restrictions could also affect farmers as the planting season approaches, WFP said in a statement, warning that “an inadequate response” to current needs “would put the future well-being of millions of people in the region at stake, particularly women and young children”.

It could also lead to civil unrest in parts of a region already challenged by insecurity and violent extremism, the agency said, before adding that it was seeking to overcome challenges in partnership with the authorities.

A significant problem is the halt in school meal distribution, which has affected 18 million pupils supported through Government-led programmes and 2.2 million schoolchildren in WFP-supported schools.

“When Governments have had to close schools and stop (serving) school meals, we have worked with them,” said Ms. Byrs. “We are working with them, to organize distribution points for the most vulnerable families who can take food rations so that they aren’t penalized, as schools have been forced to shut, in line with confinement measures.”

She added: “We have put in place monitoring and evaluation systems to help us to target the most at-risk populations, and we do that with partners, with Governments of course, and the international humanitarian community, in the largest sense of the term.”

WFP urgently requires an additional $574 million to provide crucial assistance for the next six months in West Africa. These requirements are likely to increase in the coming weeks as the impact of COVID-19 is fully analysed.

Download logo
In Niger, many young children are suffering the effects of malnutrition (WFP/Simon Pierre Diouf)