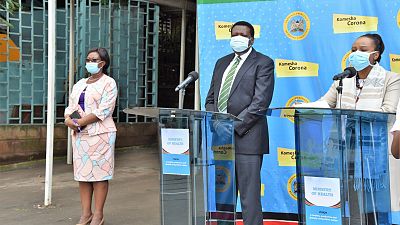 The number of patients who have recovered from COVID-19 has risen to 129 after five more patients were discharged from hospital today.

Addressing the media today the Chief Administrative secretary, Dr. Mercy Mwangangi said “We have recorded many recoveries of our people who have successfully been treated of the disease, and have been let to go home.”

However, she disclosed that even as we celebrate these recoveries, the Ministry is disturbed that re-integration has not been easy for others because of being stigmatized.

“This is quite unfortunate considering our constant appeal and massive education, across many platforms, that COVID-19 is a disease like any other,” she noted.

She also announced that the government has tested a total of 508 samples from 14 Counties in the last 24 hours out of which, 10 people have tested positive for coronavirus, nine of from Mombasa and one from Nairobi, aged between 12 and 63 years. Six are males and four are females.

This brings to 384 the total number of positive cases in the country, the CAS said and added that the Covid-19 situation is showing a trend where more new positive cases are being recorded in the two counties of Nairobi and Mombasa. 284 samples tested were from Nairobi, while 89 from were Mombasa.

All the nine cases in Mombasa were picked from among the communities by the disease surveillance teams and each of the following areas in Mombasa had one case; Old Town, Santana, Miritini, Bamburi, Mikindani, Kibokoni, Ganjoni, Memon and Tudor. The Nairobi case was from Kawagware.

She said the Government will continue to partner with Mombasa County on containment measures to curtail the spread of the infection. “We are organizing for additional surveillance and management support among other interventions to the County,” Dr. Mwangangi said.

However, the CAS also announced that the country had lost one more patient bringing to 15 the total number of fatalities.

He also announced that the government will utilize schools to be able to create enough space for families already displaced by floods due to the ongoing heavy rainfall.

”As at yesterday 116 lives had been lost due to floods, with more than 100,000 households displaced. Twenty nine counties have so far been affected including Elgeyo Marakwet and West Pokot,” he said.

The government, Wamalwa added has released more than 40,000 bags of rice, and other food and non food items to go towards assisting those who had been affected by floods and mudslides.

“We want to assure Kenyans that we have enough food in the country and we will be able to support all those who have been displaced so that they are able to receive this support but even as we support them we want to be cautious so that we heed the ministry of health guidelines,” Wamalwa said.

Distributed by APO Group on behalf of Ministry of Health, Kenya.
Media files