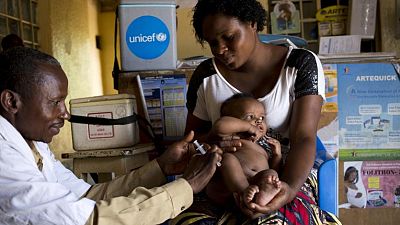 Amid the growing COVID-19 epidemic, the Democratic Republic of the Congo (DRC) is continuing its routine immunization activities to tackle measles outbreaks in the North Kivu province, in the east of the country.

Since 1 January 2020, 3,167 cases of measles have been reported in North Kivu province. Children under the age of five are the most affected.

The vaccination protocol has been modified to limit the risk of transmission of COVID-19. Caregivers or parents and their children will only be allowed inside the health centres in small groups and are required to keep at least one-metre distance from others. In addition to the supply of vaccines, UNICEF has ensured the provision of protective equipment, sanitizers and surgical gloves for health workers administering the vaccines. Children, their caregivers and parents will also be required to wash their hands with soap and water provided at the vaccination site.

“Immunization remains a life-saving health intervention. It is absolutely essential to continue immunization activities, while ensuring that the protective and preventive measures against COVID-19 are respected and that health personnel are trained and equipped to carry out their mission,” said Frederic Emirian, the head of UNICEF’s Office in Goma.

Between 2019 and 2020, the measles epidemic was the most serious in the Democratic Republic of the Congo with more than 332,000 cases and more than 6,200 deaths, of which about 85 per cent are children under 5 years of age. Vaccination is the only means of prevention against measles and the measles vaccination campaign in North Kivu province follows a campaign in Equateur province, where more than 200,000 children were vaccinated between 23 and 25 March 2020.

In a report* published on 31 March 2020, UNICEF called on the Government to allocate a greater share of its budget to vital health services for pregnant women, newborns and young children and to make the strengthening of routine immunization a priority.