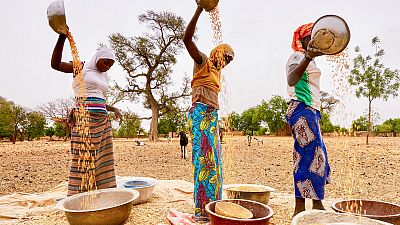 Food insecurity levels in the Sahel region are “spiralling out of control”, the World Food Programme (WFP) said on Thursday, as it expressed concerns about the potential impact on humanitarian supply chains because of restrictions imposed in response to the COVID-19 pandemic.

Across the Central Sahel in Africa – encompassing Burkina Faso, Mali and Niger – more than five million people face severe food insecurity ahead of the coming lean season, according to data released by WFP and other humanitarian partners.

Humanitarians have repeatedly warned that chronic insecurity linked to successive drought and violent extremists who exploit the lack of a strong State presence have created an avoidable crisis, which WFP said has now extended to the coastal countries of Sierra Leone and Liberia.

Forecasts indicate that Burkina Faso will see food insecurity more than triple, to more than 2.1 million people in June, up from at least 680,000 at the same time last year.

“For the lean season, in the upcoming months June to September, the analysis concluded that we are going from 10.8 million people declared food insecure last year, to 19.1 million people in 2020,” said Eric Branckaert, WFP Senior Vulnerability Analysis and Mapping (VAM) Adviser, speaking to journalists via videoconference.

“This is an increase of 77 per cent since last year and it is unprecedented.”

Citing Burkina Faso’s experience as illustrative of the plight facing its Sahel neighbours, Alexandre Lecuziat, WFP Senior Regional Emergency Preparedness and Response Adviser, said in English and French that it was “one of the most or the fastest growing displaced population crisis in the world. It’s a country that virtually had no IDPs, internally displaced populations, 18 months ago and now the latest official figures are in excess of 800,000 people displaced.”

Speaking via videoconference, Mr Lecuziat said that although WFP has access across the Sahel to populations in need, the agency is extremely concerned about the impact of the new coronavirus on a region with one of the weakest healthcare systems in the world.

If it emerges in a similar way to much of the rest of the world, it will lead to “a serious deterioration” in people’s resilience, as markets and borders close, preventing herders from moving their animals to fresh pasture, he explained.

Social distancing measures have already been implemented by WFP and its partners during aid deliveries, in a bid to keep staff and communities safe.

“We need to limit the number of people that gather so we need to fragment the number of sites of distribution,” Mr Lecuziat said. “The maximum numbers vary from one country to the other, but in general not more than 50 people can be gathered; and even when those people can be gathered, we are implementing standard operating procedures to minimize the transmission of the disease. So there is a temperature check for all people coming into the distribution sites and we have to respect one metre between every individual coming in to get the food assistance.”

At a wider logistical level the UN agency is also exploring all options to ensure that vital aid supply lines can withstand the expected disruption of COVID-19.

“Some of the bigger companies, and indeed the main suppliers globally, are in countries that are currently under strict confinement and a very reduced level of production,” Mr Lecuziat explained. “A lot of the nutritious products are produced in India or France, for example, where factories have had to reduce or close, or reduce significantly their production. We have big concerns on this, and our supply chain colleagues together with UNICEF, are looking at locally available enriched foods to complement this.”

In a statement, WFP said that it had assisted 1.5 million people in Burkina Faso and Mali in February.

It has appealed for more support to tackle the crisis and urgently requires $208 million for the next five months to carry out its lifesaving operations.

“This is a crisis layered on top of a crisis, and the situation risks getting out of hand,” said Chris Nikoi, WFP’s Regional Director for West Africa. “People are on the brink – we must step up now to save lives – we are the only hope for millions.”