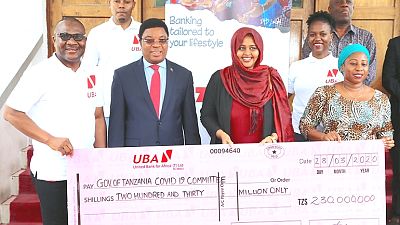 Prime Minister Kassim Majaliwa received contributions in cash and equipment worth 1.185bn/- from entities and individuals to support government efforts in the fight against COVID-19, asking each individual to take precautionary measures.

“We are now in a state of war. We must jointly fight it by doing whatever is within our ability to prevent the spread of the virus in our country. We must stick to the advice provided by President John Magufuli, that requires every Tanzanian to take part in this war,” Prime Minister Majaliwa said after receiving the contributions at his office in Dar es Salaam.

He said the Government was doing everything in its power, including instituting all the necessary measures to ensure the deadly virus was not spreading in the country.

He thanked health workers, including doctors and nurses and other health experts for devoting their life to serve others.

Speaking on the contributions he received, Prime Minister Majaliwa said the cash and equipment will be judiciously used in the fight against the disease that is now ravaging the world.

He asked the public to continue according the Government the necessary support in the war against the dreadful virus.

In the list of stakeholders who turned up at the PM's office to offer their contributions include UBA bank that contributed 230mn/-, CRDB Bank that dished out 1500mn/-, NMB Bank that offered 100mn/- while Tanzania Oxygen Limited offered to rehabilitate an oxygen production plant at a cost of 158mn/-.

Others are Karimjee Jivanjee Ltd and its associate companies that dished out 200mn/-, including volunteering to carry out seven-day free maintenance on all Toyota vehicles used in the campaign against COVID-19, and Karimjee family that offered a 180 KVA generator worth 75mn/-.

Also in the list of contributors was the Association of Tanzania Oil & Gas Service Providers (ATOGS) that contributed equipment, including vehicles with Public Address system that will be used in sensitising the public for four consecutive months through Advent Construction firm, drinking water from Bakhressa Group and Billboard (Ashton Media), all worth 150mn/-.

Others are the Confederation of Tanzania Industries (CTI) that contributed 1,000 water tanks for washing hands, each with a capacity of 250 litres worth 25mn/-, GSI Tanzania Limited which offered 1,600 bottles of hand sanitizers worth 4mn/-, Mount Meru who contributed sanitizers worth 2mn/-, Aga Khan Hospital which contributed drugs, sanitizer soap and other medical equipment worth 10.22 mn/-.

Oryx Gas has volunteered to supply gas to hospitals and the government designated isolation centres worth 25 mn/-, while Tredea Cosmetics has contributed sanitizers worth 1.6 mn/-.

Several mama lishe from Ilala Municipality and machingas from Kariakoo contributed soap and sanitizers worth 2mn/-, while the Tanzania Chamber of Commerce, Industry and Agriculture (TCCIA) contributed 50 sets of bedsheets, 10 mattresses, 400 bottles of sanitizers, and 170 bottles of detergents worth 5mn/-.

On behalf of President Magufuli, Prime Minister Majaliwa thanked the contributors, asking others wishing to offer contributions to visit his office or the Health Ministry.

Those living outside the country could offer their contributions via National Relief Fund Electronic Account No: 9921159801.