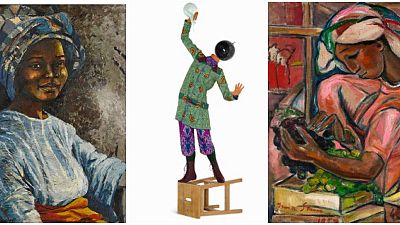 This Spring, following the record-breaking results achieved in October 2019, Sotheby’s auction of Modern and Contemporary African Art (https://bit.ly/2wVm3Sv) will return to London for a fifth consecutive season. Since the inauguration of the series in 2017, Sotheby’s (www.Sothebys.com) sales in the category have achieved more than sixty world records, championing the work of artists across Africa and the wider diaspora, and underscoring a rising global interest in the field. Over 100 works, by artists from 21 countries, will be on view to the public from 21-24 March ahead of the auction on March 25.

The sale will be led by a radiant early painting by Nigerian master Ben Enwonwu. Until recently, the enigmatic sitter had been known only as the ‘Nigerian princess’ but, upon close examination, Sotheby’s specialists noticed intricate details which lead them to believe the sitter could be Princess Judith Safinet ‘Sefi’ Atta. The sitter’s blouse is fashioned from the Okene cloth produced by the Ebira women of Sefi’s hometown. Upon contacting Sefi’s daughter, the artist Obi Okigbo, she revealed that her mother knew Enwonwu well: “When Hannah sent me the photo of the painting, I felt like I was like looking at a portrait of myself. The family resemblance is remarkable”.

Painted in 1953, Sefi will appear at auction for the first time with an estimate of £200,000-300,000. Until now, the fine portrait has remained in the family collection of a prominent West African academic and writer. It was brought to Sotheby’s attention when the current owner requested a free estimate on Sotheby’s Online Estimate Platform (https://bit.ly/3aMDtQ0).

“Stories like this are the reason I love what I do. Not only have we come across an outstanding early painting by Ben Enwonwu, we have also uncovered a moving story about Sefi herself – an accomplished force in the fight for women’s right to education in Nigeria and beyond. This portrait sits right at the crux of the cultural and artistic landscape of 20th century Nigeria. As the battle for a unified identity intensified, so did the passions of the writers, poets and painters who were working side by side – Ben Enwonwu, Chinua Achebe, John Pepper Clarke, and the poet Christopher Okigbo, the latter of whom Sefi married. It has been an honour to hear this story, and I am grateful to Sefi’s daughter Obi for letting me in.”

The appearance of this portrait follows hot on the heels of Enwonwu’s Christine, which was also presented to Sotheby’s via the free Online Estimate Platform (https://bit.ly/3aMDtQ0) before selling for £1.1 million at Sotheby’s last October – the second highest price for a work by the artist at auction.

And, in a remarkable coincidence, a bronze sculpture by Enwonwu will also feature in the sale (est. £100,000-150,000), which depicts Afi Ekong, one of Nigeria’s most famous female artists who was at that time married to Sefi’s brother. One of a limited edition, the original was purchased by Her Majesty Queen Elizabeth II when she sat for the artist in London in 1957. Together with Sefi, these two works are refined and proud portrayals of Nigerian royalty in the run up to independence in 1960.

Further Highlights: Irma Stern
The sale will feature four pioneering works by South African artist Irma Stern. Chronicling the artist’s lifelong quest for inspiration across Africa, Europe and beyond, the paintings stand testament to Stern’s unique vision and unrivalled artistic skill. Last month, the paintings went on view as part of Irma Stern: A Life Well Travelled at the Irma Stern Museum, Cape Town. Prior to this, none of the paintings had been seen in public for over ten, or in some cases twenty, years.

The artwork consists of 11 serigraphs constructed with news, drawings, text, prints and photographs representative of apartheid. Conjuring an image of early learning and first steps in art, it is presented as a child’s colouring book with titles that sarcastically allude to the structural oppression and discrimination lived in South Africa under the Afrikaner Nationalist Party.

Gavin Jantjes was exiled from his native South Africa in 1982 for creating art, which tackled ignorance about apartheid politics. At the time, even exhibiting the artist’s work could have landed anyone in jail. Now it is the subject of PhD theses and used by the United Nations to highlight racial discrimination under the apartheid regime.

Yinka Shonibare Cbe
Bad School Boy, 2014. Est. £100,000-150,000
Influenced by his own British Nigerian culture, Shonibare explores questions of cultural hybridity and what it means to be African in a contemporary and globalised context. Touching on themes of history, identity, wealth and power, the artist reproduces scenes based on Western culture and traditions, using life-sized mannequins clothed in colonialist European garb with an African twist.

The artist’s mise-en-scènes are often riddled with contradictions, ideas of contamination, colonialism, globalisations and even notions of fakery and villainy. Balancing atop of a tipped over lab stool, a figure mischievously pours out the contents of his laboratory flask in Bad School Boy – a comment on the contradictions of science, which can simultaneously be a force of good and a force of destruction.

Distributed by APO Group on behalf of Sotheby’s.

About Sotheby’s:
Sotheby’s (www.Sothebys.com) has been uniting collectors with world-class works of art since 1744. Sotheby’s became the first international auction house when it expanded from London to New York (1955), the first to conduct sales in Hong Kong (1973), India (1992) and France (2001), and the first international fine art auction house in China (2012). Today, Sotheby’s has a global network of 80 offices in 40 countries and presents auctions in 10 different salesrooms, including New York, London, Hong Kong and Paris. Sotheby’s offers collectors the resources of Sotheby’s Financial Services, the world’s only full-service art financing company, as well as the collection, artist, estate & foundation advisory services of its subsidiary, Art Agency, Partners. Sotheby’s also presents private sale opportunities in more than 70 categories, including S|2, the gallery arm of Sotheby's Global Fine Art Division, and three retail businesses: Sotheby’s Wine, Sotheby’s Diamonds, and Sotheby’s Home, the online marketplace for interior design. *Estimates do not include buyer’s premium. Prices achieved include the hammer price plus buyer’s premium and are net of any fees paid to the purchaser where the purchaser provided an irrevocable bid.