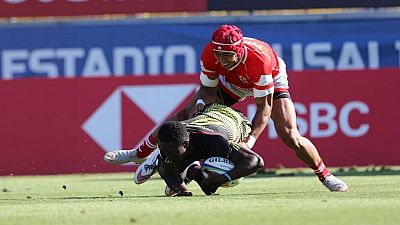 Uganda started their tournament brightly against Italy who were unknowns – Uganda came away with a strong 24-14 win with a hat trick and a conversion from Philip Wokorach while Micheal Okorach added a 4th try and  Aaron Ofoyrwoth a conversion.  Their second game was against Paraguay, also an unknown entity, but Uganda cruised to an easy 47-00 win with Philip Wokorach, Solomon Okia and Ian Munyani touching down twice and Aaron Ofoyrwoth also getting a try to his name while Philip converted 6 of the 7 tries.

Germany once again broke Ugandan hearts despite Uganda initially leading 07-00 at half time through an Aaron Ofoyrwoth and Philip Wokorach adding the extras.  Germany took the lead in the second half with 2 unconverted tries and despite Norbert Okeny scoring to reduce the gap, Germany scored again and held on until the end of the game to win 19-12.  Uganda finished day 1 as second in their pool and went on to the quarter final where they met Hong Kong.

Hong Kong suffocated Uganda of possession and Uganda did little to help their cause when they gifted Hong Kong possession through unforced errors.  Hong Kong scored once each half with neither conversion being successful.  Uganda managed to hit back through a Norbert Okeny try after he collected a pass from Philip Wokorach who had broken the line and Nobert high tailed it from inside the Ugandan half to dot down between the posts.  Philip Wokorach added the extras to cut the deficit to 3 points but Hong Kong stifled Uganda’s attack and run out 10-07 winners.

Uganda then dropped to the 5th place semi final where they met Tonga, a team Uganda had never lost to before.  It seemed like it would be business as usual when Desire Ayera took advantage of Tonga misfielding the kickoff and pounced on the loose ball and scored within 15 seconds – possibly the quickest try in the entire tournament.  Philip Wokorach obliged with the extras but 2 tries and one conversion from Tonga before the break had Uganda trailing 12-07 at half time.  An inspired run out of Uganda’s half by Pius Ogena in the second half took Uganda into Tonga’s 5 and after a series of passes Nobert Okeny latched onto the ball to score.  Once again, Philip Wokorach’s boot found its target and Uganda took a slim 2 point lead.  Defensive lapses let Uganda down again and Tonga found the corner to take the lead once more and held on to win 19-12 and go on to the 5th place final against Zimbabwe that they won by an identical score.  Germany went on to win the tournament after beating Hong Kong in the final while Japan beat Chile in the 3rd place final.

Uganda travel to Uruguay today where they are in Pool B with Hong Kong (seed 2), Jamaica (seed 10) and Brazil (seed 15).