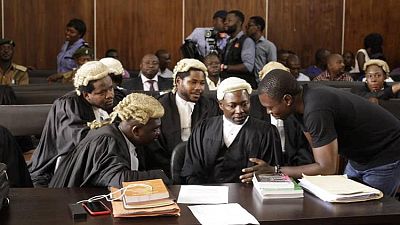 The Committee to Protect Journalists today called on Nigerian authorities to drop all charges against Agba Jalingo, the publisher of the privately owned news website CrossRiverWatch, and set him free. Jalingo is set to appear at a federal high court in Calabar city tomorrow on amended charges, including cybercrime relating to his outlet’s reporting on Cross River Governor Benedict Ayade, and terrorism, according to a charge sheet, which CPJ reviewed, and Jalingo’s lawyer, Attah Ochinke, who spoke to CPJ in a phone interview.

“The ongoing, opaque prosecution of Agba Jalingo for his journalism remains a grave display of the threats journalists face working in Nigeria,” said Angela Quintal, CPJ’s Africa program coordinator. “Nigerian authorities should drop the charges against Jalingo, stop using cybercrime and anti-terrorism legislation to silence the press, and reform these laws to ensure they cannot be used against journalists.”

Jalingo has been jailed since August 22, 2019, when he was arrested and initially charged with disturbance of public peace and treason, as CPJ documented at the time. In October 2019, he was denied bail and a federal high court in Calabar blocked public access to the courtroom and granted anonymity to individuals expected to present evidence against him, a move his lawyer said would limit the defense’s ability to challenge false testimony, CPJ reported at the time. Jalingo currently has another bail application pending, Ochinke said.