Launch of the “Decade of African Roots and Diasporas” 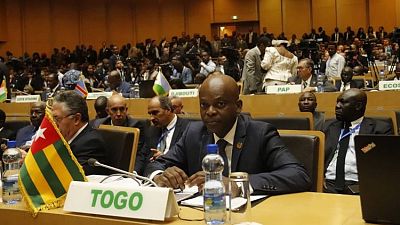 Within the framework of the 33rd Summit of the African Union, the Minister of Foreign Affairs, African Integration and Togolese Abroad, Pr Robert DUSSEY, representing HE Mr. Faure Essozimna GNASSINGBE, President of the Togolese Republic, presented the February 10, a communication on behalf of Togo on the launching of the “Decade of African Roots and Diasporas”.
This Togolese initiative, “Lomé Framework”, aims to set up a platform for the preparation and promotion of projects, initiatives and events relating to African roots and diasporas and aims mainly to:
Minister Robert DUSSEY underlined, at the Summit of Heads of State and Government, the inclusive nature of the Lomé Framework aimed at grouping and federating initiatives with a view to strengthening the role and contributions of people of African roots and diasporas to the economic development of the continent.
After the communication of Minister Robert DUSSEY at the Summit of the African Union, a large majority of countries adhered to the Togolese initiative and the Presidency of the African Union wished to reaffirm the importance of the question of roots and diasporas African. A consensus emerged on the establishment of a High Level Committee to prepare the content and the conditions for the implementation of this pan-African platform.
A call for project proposals open to all African countries is planned for the identification, study and selection of projects that can be included in the continental agenda of the Decade of African Roots and Diasporas.
Through this innovative framework for cooperation between African countries, the aim is to better involve Africans from outside and to strengthen the links between Afro-descendants, communities with African roots, diasporas and their continent, “mother earth. “, Africa. The objective is to make African diasporas strategic actors in the development of Africa.
As such, Togo is preparing the first “African Diaspora Economic Forum”, making Lomé the capital of African roots and diasporas.
Distributed by APO Group on behalf of Ambassade du Togo à Londres.
Media files

Download logo
Launch of the “Decade of African Roots and Diasporas”