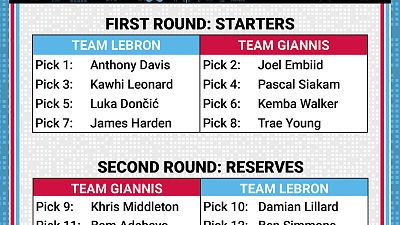 Captains LeBron James of the Los Angeles Lakers and Giannis Antetokounmpo of the Milwaukee Bucks have selected the team rosters for the 2020 NBA (http://www.NBA.com) All-Star Game, as revealed tonight in TNT’s presentation of the NBA All-Star Draft.

The Lakers’ Anthony Davis was selected by James with the first overall pick in the 2020 NBA All-Star Draft. The Philadelphia 76ers’ Joel Embiid was drafted by Antetokounmpo with the No. 2 overall pick. See below and attached for the complete pick-by-pick results and the team rosters for the NBA All-Star Game.

The 69th NBA All-Star Game will take place on Sunday, Feb. 16 at the United Center in Chicago, airing live at 8 p.m. ET on TNT and ESPN Radio in the United States. NBA All-Star 2020 will reach fans in more than 200 countries and territories in nearly 50 languages on their televisions, computers, mobile phones and tablets.

James and Antetokounmpo drafted the NBA All-Star Game team rosters from the pool of players voted as starters and reserves in each conference. The two captains made 11 picks each – four starters and seven reserves – without regard to a player’s conference affiliation or position.

Both NBA All-Star Game teams will play for a Chicago-based charity beneficiary, as selected by James and Antetokounmpo. Team LeBron will play for Chicago Scholars (http://bit.ly/2UwruRR), a nonprofit leadership development organization that empowers academically ambitious students from under-resourced communities to complete college and become the next generation of leaders. Team Giannis will play for After School Matters (http://bit.ly/39dY0fr), a nonprofit organization that provides life-changing after-school and summer program opportunities to nearly 19,000 Chicago teenagers each year.

As part of the new format for the 2020 NBA All-Star Game, the two teams will compete to win each quarter for their designated charities. Click here (https://on.nba.com/2StZVGh) for more information about the new format.

Team Giannis will wear the red Jordan Brand NBA All-Star 2020 uniforms and Team LeBron will wear the blue Jordan Brand NBA All-Star 2020 uniforms. As previously announced, Team Giannis will wear No. 24 and Team LeBron will wear No. 2 – the basketball jersey numbers of the late Kobe Bryant and his daughter Gianna, respectively. Both teams will wear jersey patches displaying nine stars, representing Kobe, Gianna and their seven friends and teammates who tragically passed away in a helicopter accident on Jan. 26.

NBA Commissioner Adam Silver will select the replacement for any player unable to participate in the All-Star Game, choosing a player from the same conference as the player who is being replaced. Silver’s selection would join the team that drafted the replaced player. If a replaced player is a starter, the head coach of that team would name a new starter from his team’s group of reserves. Lakers head coach Frank Vogel will lead Team LeBron, and Toronto Raptors head coach Nick Nurse will guide Team Giannis.

About NBA All-Star 2020:
NBA (http://www.NBA.com) All-Star 2020 in Chicago will bring together the most talented and passionate players in the league’s history for a global celebration of the game. The 69th NBA All-Star Game, which will take place on Sunday, Feb. 16 at United Center, will reach fans in more than 200 countries and territories in nearly 50 languages. TNT will televise the All-Star Game for the 18th consecutive year, marking Turner Sports’ 35th year of NBA All-Star coverage. United Center will also host Rising Stars on Friday, Feb. 14 and State Farm All-Star Saturday Night on Saturday, Feb. 15. The NBA All-Star Celebrity Game presented by Ruffles on Feb. 14 and the NBA All-Star Practice & Media Day presented by AT&T on Feb. 15 will take place at Wintrust Arena.