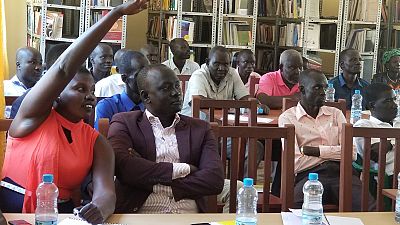 “Women and men have equal rights and if we are given that opportunity, I think we will be able to participate fully in governance, and we can do anything that a man can do.”

That was the view of Abuk Monykuer a participant at a two-day leadership forum organized by the United Nations Mission in South Sudan to discuss the 35 percent affirmative action plan for women’s participation in political institutions which is included in the 2018 revitalized peace agreement.

“If that 35 per cent representation is given to us at all then, we, as women are going to do the work as required,” she said.

More than 25 women from the Jonglei region participated in the forum, along with about 15 lecturers and students from the Dr. John Garang Memorial University of Science and Technology in Bor. The event was held at a crucial time in the peace process as the country’s leaders work towards forming a new transitional government before the end of February.

Women make up more than half of South Sudan’s population. But only 29 percent of Parliamentary seats and very few governorships and ministerial positions are held by women.

Several male participants at the dialogue, organized by the Gender Affairs Unit of UNMISS, welcomed the 35 percent target for women.

“We want our young ladies, our women, to rise to the same level with us. The 35 percent stipulated in the agreement must be granted to them because we realize that, if women occupy positions in our communities, they will bring a lot of development,” said university lecturer, Anyieth Abraham.

The Head of the UNMISS Field Office in Jonglei, Deborah Schein, said the region was a good example of what can be done to empower women. She also appreciated the university’s efforts to organize educational classes to teach women working at the academic institution to read.

“It is never too late to learn.”