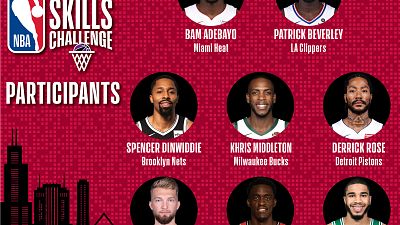 Defending champion Jayson Tatum of the Boston Celtics and former champions Patrick Beverley of the LA Clippers, Spencer Dinwiddie of the Brooklyn Nets and Derrick Rose of the Detroit Pistons will display their vast array of talents in the 2020 Taco Bell® Skills Challenge on Saturday, Feb. 15 at the United Center in Chicago.

Tatum is one of five 2020 NBA All-Star selections in the eight-player field, joined by the Miami Heat’s Bam Adebayo, the Milwaukee Bucks’ Khris Middleton, the Indiana Pacers’ Domantas Sabonis and the Toronto Raptors’ Pascal Siakam.

Tatum and Dinwiddie won the Taco Bell® Skills Challenge in 2019 and 2018, respectively. Beverley, a Chicago native, was crowned champion in 2015. Rose, a Chicago native and the 2010-11 Kia NBA MVP while playing with the Chicago Bulls, earned the Skills title in 2009 as an NBA rookie.

The 2020 Taco Bell® Skills Challenge is a three-round, obstacle-course competition that tests the players’ dribbling, passing, agility and 3-point shooting. Featuring a mix of guards and frontcourt players, the event showcases a head-to-head, bracket-style tournament format. First-round matchups will be determined on the night of the event.

Here is a closer look at the 2020 Taco Bell® Skills Challenge participants:

• Bam Adebayo, Heat (1st appearance): A first-time NBA All-Star selection in his third season, Adebayo is one of five players averaging at least 15.0 points, 10.0 rebounds and 4.0 assists per game in 2019-20. He has recorded his first three career triple-doubles this season.

• Patrick Beverley, Clippers (2nd appearance): The 6-1 guard is a two-time NBA All-Defensive Team selection, a career 37.9 percent shooter from 3-point range and a premier rebounder at his position. Beverley is averaging 5.8 rebounds per game this season, just below his career high of 5.9 rebounds set in 2016-17.

• Spencer Dinwiddie, Nets (2nd appearance): He is averaging a career-high 21.3 points and 6.4 assists per game. The NBA G League veteran has improved his scoring average in each of his four seasons with Brooklyn.

• Khris Middleton, Bucks (1st appearance): An NBA All-Star selection for the second straight year, Middleton is posting career highs in scoring (20.4 ppg), field goal percentage (50.8) and 3-point field goal percentage (44.2) to go with 5.8 rebounds and 4.1 assists per game. He scored a career-high 51 points against the Washington Wizards on Jan. 28.

• Derrick Rose, Pistons (3rd appearance): Rose is shooting a career-high 49.8 percent from the field and averaging his most points (18.5 ppg) and assists (5.8 apg) since the 2011-12 season. A three-time NBA All-Star selection, Rose last appeared in the Taco Bell® Skills Challenge in 2011.

• Domantas Sabonis, Pacers (1st appearance): Sabonis is averaging career highs across the board as a first-time NBA All-Star selection, with 18.3 points, 12.7 rebounds and 4.6 assists per game. He ranks third in the NBA in double-doubles (38) and has recorded his first two career triple-doubles this season.

• Pascal Siakam, Raptors (1st appearance): Siakam has become the first NBA G League veteran to be named a starter in the NBA All-Star Game. This season, he has already set a career high for 3-pointers made (84) to go with career-high averages of 23.7 points, 7.6 rebounds and 3.4 assists per game.

2020 Taco Bell® Skills Challenge Rules
Two players compete simultaneously on identical courses and the fastest finisher reaches the next round. In the first round, the eight players are paired to participate in four head-to-head competitions. The four winners advance to the second round, where two more head-to-head showdowns determine the two finalists. The first finalist to successfully complete the course is declared the winner of the 2020 Taco Bell® Skills Challenge. Click here (https://on.nba.com/2RX10ai) for a complete explanation of the rules.

See below for the 2020 Taco Bell® Skills Challenge field and a list of previous winners.

About NBA All-Star 2020:
NBA All-Star 2020 in Chicago will bring together the most talented and passionate players in the league’s history for a global celebration of the game. The 69th NBA All-Star Game, which will take place on Sunday, Feb. 16 at the United Center, will reach fans in more than 200 countries and territories in more than 40 languages. TNT will televise the All-Star Game for the 18th consecutive year, marking Turner Sports’ 35th year of NBA All-Star coverage. The United Center will also host Rising Stars on Friday, Feb. 14 and State Farm All-Star Saturday Night on Saturday, Feb. 15. The NBA All-Star Celebrity Game presented by Ruffles on Feb. 14 and the NBA All-Star Practice & Media Day presented by AT&T on Feb. 15 will take place at Wintrust Arena. 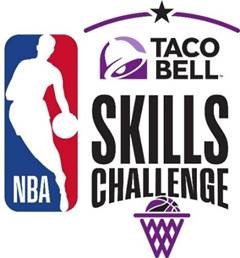