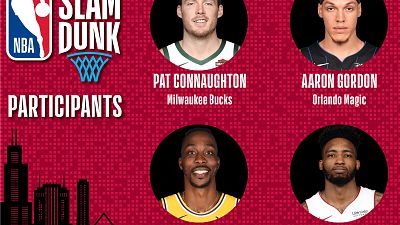 Former Slam Dunk champion Dwight Howard (https://bit.ly/2UsTTbA) of the Los Angeles Lakers returns to the competition for the first time in 11 years as he headlines the field of four players who will take flight in the 2020 AT&T Slam Dunk on Saturday, Feb. 15 at the United Center in Chicago.

Howard, the 2008 Slam Dunk champion, will compete in the event for the first time since 2009, when he made the last of three consecutive appearances. Gordon’s dazzling runner-up performance in 2016 included three straight perfect scores of 50. Jones Jr., who turns 23 on the same day as AT&T Slam Dunk, finished second in 2017. Connaughton is seeking to become the first Milwaukee player to win Slam Dunk.

Here is a closer look at the 2020 AT&T Slam Dunk participants:

• Pat Connaughton, Bucks (1st appearance): The 6-5 guard is in his second season with Milwaukee after spending his first three NBA seasons with the Portland Trail Blazers. Connaughton (CONN-uh-ton) recorded a max vertical leap of 44 inches at the 2015 NBA Draft Combine, tied for the third-highest mark in event history. He was selected as a pitcher by the Baltimore Orioles in the 2014 Major League Baseball Draft.

• Aaron Gordon, Magic (3rd appearance): Gordon returns to AT&T Slam Dunk for the first time since 2017. The 6-9 forward ranks third on the Magic in scoring (13.6 ppg) and second in rebounding (7.2 rpg) in his sixth NBA season.

• Derrick Jones Jr., Heat (2nd appearance): As a rookie in the 2016-17 season, Jones became the first player to compete in AT&T Slam Dunk and play in the NBA G League in the same season. Since then, the undrafted Jones has earned a full-time role in the NBA. Nicknamed “Airplane Mode” for his leaping ability, the 6-7 Jones won a national dunk contest for high school players in 2015.

2020 AT&T Slam Dunk Rules
In the two-round event, participants can perform any dunk they choose. The players have a maximum of three attempts to complete each dunk in both the first round and the final round. Five judges score every dunk on a scale of 6 to 10, resulting in a high score of 50 and a low score of 30. The judges will be announced at a later date.

See below for the 2020 AT&T Slam Dunk field and a list of previous winners.

About AT&T Communications:
We help family, friends and neighbors connect in meaningful ways every day. From the first phone call 140+ years ago to mobile video streaming, we innovate to improve lives. We have the nation’s fastest wireless network.** And according to America’s biggest test, we have the nation’s best wireless network.*** We’re building FirstNet (www.FirstNet.com) just for first responders and creating next-generation mobile 5G. With a range of TV and video products, we deliver entertainment people love to talk about. Our smart, highly secure solutions serve nearly 3 million global businesses – nearly all of the Fortune 1000. And worldwide, our spirit of service drives employees to give back to their communities.

**Based on analysis by Ookla® of Speedtest Intelligence® data average download speeds for Q3 2019. Ookla trademarks used under license and reprinted with permission.
***GWS OneScore, September 2019.

About NBA All-Star 2020:
NBA All-Star 2020 in Chicago will bring together the most talented and passionate players in the league’s history for a global celebration of the game. The 69th NBA All-Star Game, which will take place on Sunday, Feb. 16 at the United Center, will reach fans in more than 200 countries and territories in more than 40 languages. TNT will televise the All-Star Game for the 18th consecutive year, marking Turner Sports’ 35th year of NBA All-Star coverage. The United Center will also host Rising Stars on Friday, Feb. 14 and State Farm® All-Star Saturday Night on Saturday, Feb. 15. The NBA All-Star Celebrity Game presented by Ruffles on Feb. 14 and the NBA All-Star Practice & Media Day presented by AT&T on Feb. 15 will take place at Wintrust Arena. 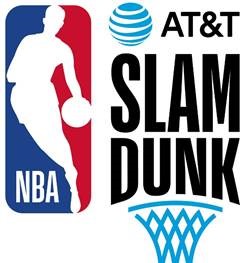